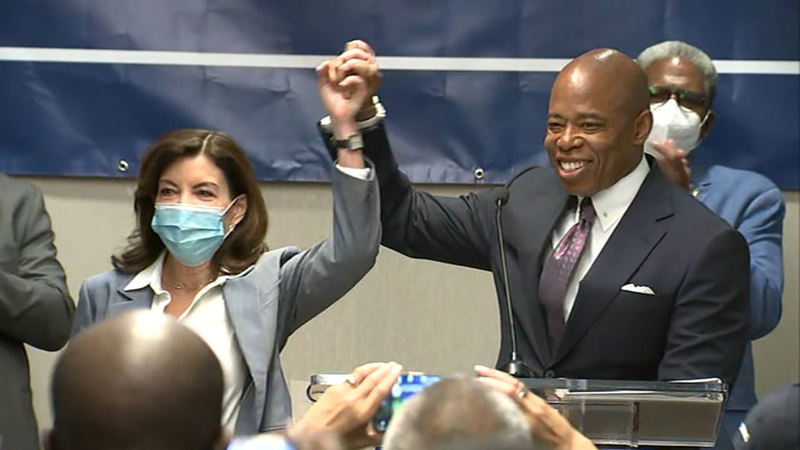 Adams made the announcement in a joint appearance with the Democratic governor in New York City.

"Before I took office, Governor Hochul and I sat down and immediately found we shared the same priorities -- the priorities of working people: public safety, childcare, housing and a more affordable New York," Adams said. "Since then, Gov. Hochul has been a true partner, working on behalf of everyday New Yorkers, and it's yielded real results. I look forward to continuing that work for years to come with Gov. Hochul and collaborating to lift this city and state to new heights."

Adams, a Democrat who took office in January, is a former police officer whose tough-on-crime message has set him apart from the city's progressives and become a defining theme of his leadership as the city grapples with rising violence.

It is a massive endorsement for the governor who isn't from downstate but needs downstate voters to win, and it comes as Hochul has pledged tougher action on gun crimes, including after the mass shooting in her hometown of Buffalo, and as she faces pushback from both Democratic and Republican challengers to do more to tackle crime.

"Mayor Adams and I are proving what a strong partnership can achieve when leaders are united in delivering results for New Yorkers," Hochul said. "Since taking office, we have worked together to tackle some of the city's most pressing issues, from public safety to housing to getting our economy back on track. We are committed to building a new chapter in our state's history that's focused on teamwork, collaboration, and progress over politics. Mayor Adams and I will continue to get things done for New Yorkers, and I'm honored to have his endorsement."

For the first time in a while, New York's governor is getting the support of the New York City's mayor.

"Some people think it's amazing that the governor and mayor get along," Adams said. "We are not surprised."

Adams was among those who pushed the governor earlier this year to roll back reforms to the state's bail laws, contending they allowed dangerous people to be released after arrest and commit more crimes.

Hochul said she didn't see any data proving that the bail law was linked to rising violent crime, but released a plan that would make more crimes eligible for detention and give judges broader latitude in setting bail.

An Emerson College poll released earlier this week found the governor has a 40-point lead over her closest competitor in the primary.

Still, her decision to spend $600 million on a stadium in Buffalo is weighing on some, but Adams said she has been key in fighting crime and in New York's recovery from the COVID-19 pandemic.

"Confidence is coming back to our city and state," he said. "Why? Governor Hochul."

Hochul took office in August when former New York Gov. Andrew Cuomo resigned amid allegations he sexually harassed women, which he denied. She is running for office in her own right this year but is being challenged in a Democratic primary by U.S. Rep. Tom Suozzi from Long Island, who has hammered Hochul on crime, and New York City's elected Public Advocate Jumaane Williams, a progressive.

"We are working to give people the reasons to come back," Hochul said. "The era of the fighting is over. Instead, we will roll up our sleeves and fight for you."

She must first compete in a June 28 primary contest before advancing to the general election.