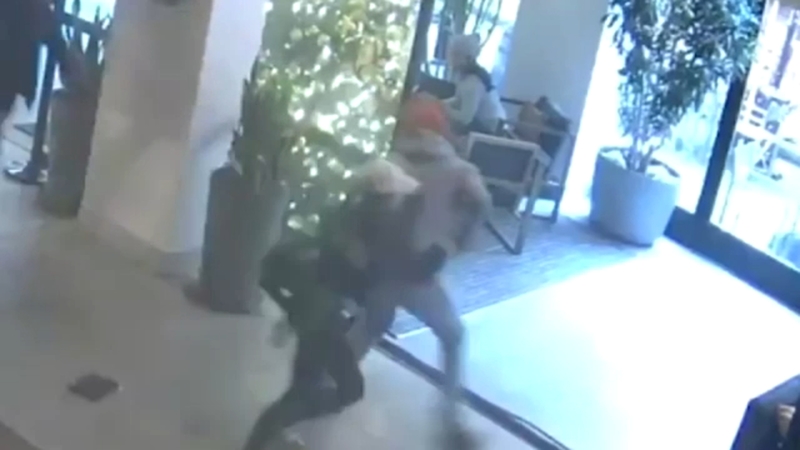 SOHO, Manhattan (WABC) -- The NYPD has released new surveillance video of the woman who accused a Grammy-winning jazz musician's son of stealing an iPhone at a Manhattan hotel.

Police say images show the woman inside the Arlo Hotel in SoHo attacking 14-year-old Keyon Harrold, Jr., before running off prior to officers' arrival.

Keyon Harrold Sr. says the woman profiled his son by assuming he had her phone, then the hotel botched the situation by giving her the benefit of the doubt.

"She was allowed to leave the premises with no repercussions for assaulting our son," mom Kat Rodriguez said. "If the shoe was on the other foot and this was a Black woman or man who assaulted a white child, which I would never condone, do you think she or he would have been allowed to leave the establishment?"

The hotel has apologized but acknowledges they could have done more.

The woman has still not been charged with a crime, but NYPD sources say they know who she is, and in fact, CNN says they got her on the phone -- and she claimed she was assaulted and injured.

On Wednesday, a rally was held in support of the Harrold family, attended by the Rev. Al Sharpton and attorney Ben Crump.

Keyon Harrold Sr. played "America the Beautiful" and "We Shall Overcome" on his trumpet, drawing applause and a few tears.

The encounter went viral after the video's release, with Crump calling for the woman to be arrested.

Police are trying to track her down, saying she lives out of state, and she could face charges ranging from assault to attempted robbery.

Mayor Bill de Blasio is also calling for charges, saying the teen "did nothing wrong, was clearly profiled because he was young and Black."

"That woman needs to face charges," he said. "And I know prosecutors are looking at that right now...That is racism, pure and simple. That is unacceptable in this city, in this country."

Still, as the legal process plays out, the woman may already be facing poetic justice in the court of public opinion.

The Black, Latino and Asian Caucus released the following statement on Thursday evening:

"The so-called "Soho Karen" who assaulted Keyon Harrold, Jr. must be arrested and prosecuted without delay. Her vigilantism is symbolic of the racial bias that often leads to the wrongful persecution and killing of Black men and women in America, but this incident was a rare exception, as the outcome surely would have been much worse had Mr. Harrold's father not been present to both defend his son and record the encounter. Not to be overlooked in this shameful affair is the Arlo SoHo hotel "manager" whose conduct legitimized the false claim made against one of its guests, Mr. Harrold, and ultimately enabled the woman to flee the establishment after attacking him. We will follow the matter closely to see whether the NYPD and Manhattan District Attorney's office indeed dispense equal justice, but the event underscores the fact that racism persists so long as people of conscience do nothing to stop it."