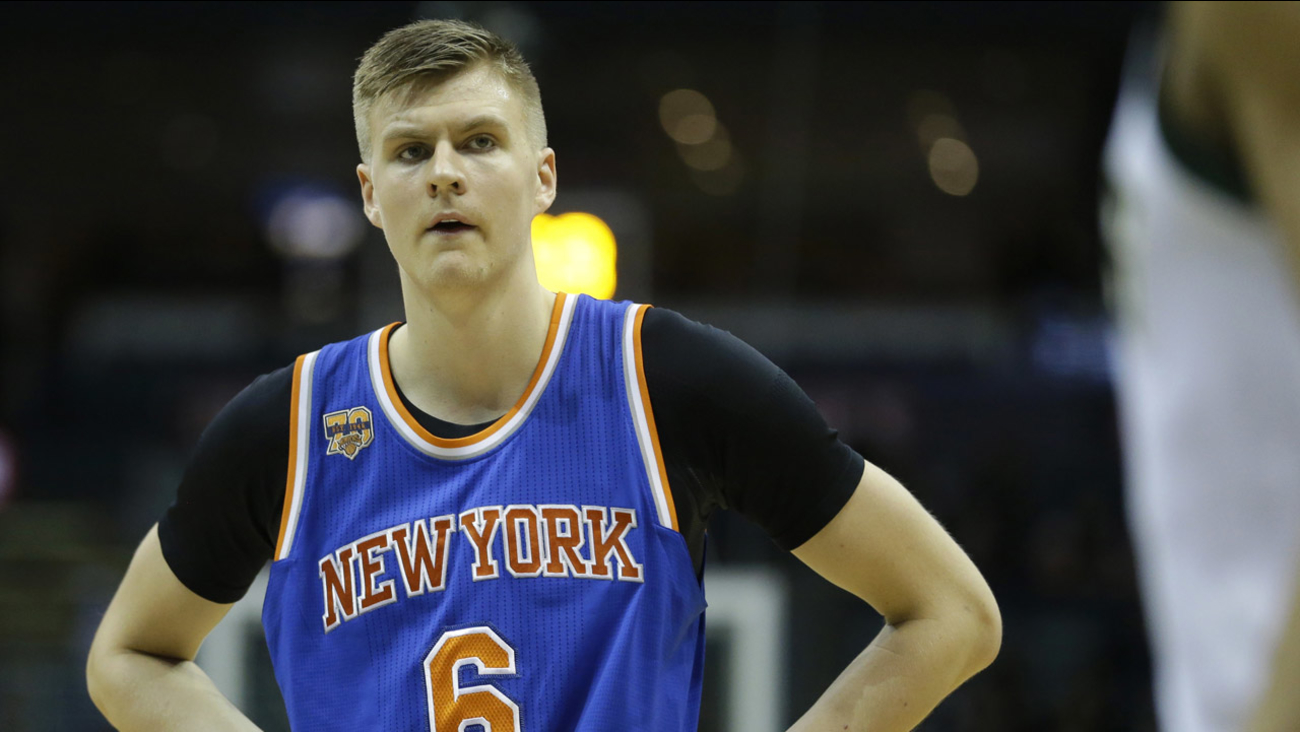 New York Knicks' Kristaps Porzingis during the first half of an NBA basketball game against the Milwaukee Bucks Wednesday, March 8, 2017, in Milwaukee. (AP Photo/Aaron Gash)

NEW YORK (WABC) -- The Knicks could find themselves in a tough position as the season evolves. They have found their next superstar, Kristaps Porzingis. The 7-foot 3-inch tall Latvian has made Knicks fans forget about Carmelo Anthony already.

Porzingis is averaging 30 points a game and his long range shooting ability and flying dunks has brought Madison Square Garden back to life.

But here is the problem, Porzingis is not built physically for an 82-game NBA season.

He already had to sit out a game in Orlando with a bum ankle and elbow. The worst thing the Knicks could do is to keep playing the big guy night after night for nearly 30 minutes.

He will break down and worse yet he could develop injuries that could kill a career.

Just ask, Yao Ming, the 7 foot 6 Chinese center who had his career cut short by foot injuries. The up and down pounding on an NBA player will take its toll. The Knicks will be far better off to cut down on games and minutes for Porzingis at this point in his career.
The Knicks are not ready to make a run at an NBA title, they need to make sure their franchise player is healthy when they finally are.
Report a correction or typo
Related topics:
sportsnew york citykristaps porzingisbasketballnew york knicks
Copyright © 2022 WABC-TV. All Rights Reserved.
NEW YORK KNICKS
Cleanthony Early on his time with the New York Knicks: 'Basketball ...
Orlando Magic win 2022 NBA draft lottery, followed by Oklahoma City...
Sports teams and athletes celebrate Star Wars Day in creative ways
Toppin, Quickley have career nights as Knicks win finale
TOP STORIES
Police shoot driver after vehicle strikes officer in Brooklyn
AccuWeather Alert: Spotty storms
Bethpage Air Show will go on as planned despite cloudy, foggy weather
Texas gunman threatened rapes, shootings on Yubo app, users say
Official admits police made 'wrong decision' in TX shooting
Texas survivor apologized to dad for blood on clothes, losing glasses
Massacre survivor says gunman told them: 'You're all gonna die'
Show More
16-year-old arrested after social media threat to shoot up NY school
Former Uvalde school teacher grieves for her mentor, students killed
Bank employees help kidnapped woman after she asks for loan
Summit on missing women and girls of color held in the Bronx
Bethpage Air Show cancels practice session
More TOP STORIES News