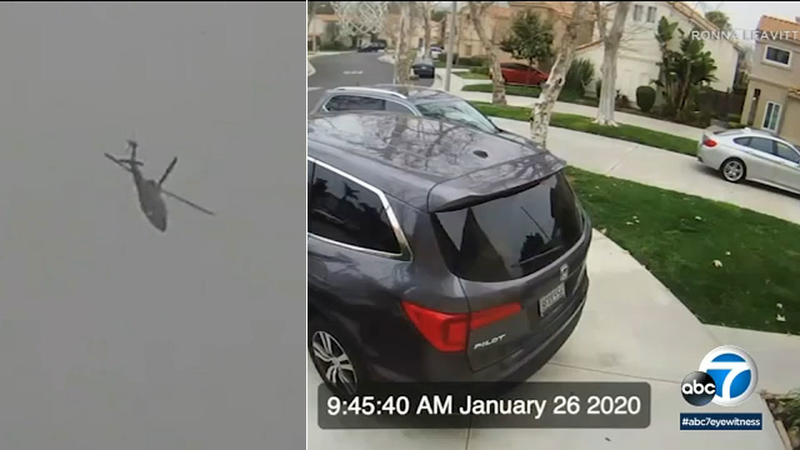 CALABASAS, Calif. -- A previous version of this report included audio of the helicopter crashing but has since been removed.

The sounds of the low-flying helicopter and subsequent crash that killed Kobe Bryant and eight others was captured on a Google Nest camera, recorded by a woman who lives near the crash site.

Ronna Leavitt said the surveillance video from her front door captured the audio of the helicopter in its final moments.
She said the helicopter flew above her housing complex and made a U-turn before crashing into the mountainside.

A timestamp of 9:45 a.m. can be seen on the video as it transmits the sound of the impact followed by deafening silence.

Watch a simulation of the flight path of the Sikorsky S-76B helicopter, which crashed in Calabasas on Sunday morning, killing Kobe Bryant, his 13-year-old daughter Gianna and seven others.

Leavitt said she spoke to investigators and provided the video to them.

A witness said she also heard the crash Sunday morning.

"We heard a sputter coming through and then a boom," Elisa Bomer said.

Nine people were killed when the Sikorsky S-76 crashed into a hill in Calabasas. Federal investigators are looking into the cause of the crash and say they may not have an answer for more than a year.
Investigators have removed the key pieces of wreckage, all nine bodies, and evidence such as an iPad, cellphone and documentation from the debris field.

Officials have determined that the helicopter crashed just 20 to 30 feet from the top of the hill at a spot area located 1,085 feet above sea level. The area was a canyon with multiple hills of different elevations surrounding it.

The NTSB confirmed that weather is one of several factors that investigators are examining. They are asking the public to send in any pictures they may have taken in the area of the crash that morning.

Weather pictures can be emailed to: witness@ntsb.gov.

An earlier version of this story identified the video as coming from a Ring camera. It has been updated to reflect the camera was a Google Nest.
Report a correction or typo
Related topics:
calabasaslos angeles countykobe bryanthelicopter crashsurveillance video
Copyright © 2022 KABC Television, LLC. All rights reserved.
TOP STORIES
7 On Your Side hunts for driver after ice cream truck hit and run
Mayor Adams holds 1st community conversation on public safety in NYC
Man slashed, nearly killed after inadvertent bump in subway station
Woman pinned under bus, rescued after being struck in crosswalk
Woman shot in chest while walking down street in Queens
406 NYC arrests among 1,500 in U.S. crackdown on outstanding warrants
Beloved New Jersey deli to close after 120 years in business
Show More
Dog rescued from water after swimming 1.5 miles off NJ coast
AccuWeather: Not as warm
Restaurant demolition to pave way for NY revitalization project
Boy, 2, found underneath parents killed at parade shooting
NYC Ferry costing taxpayers millions, audit finds
More TOP STORIES News