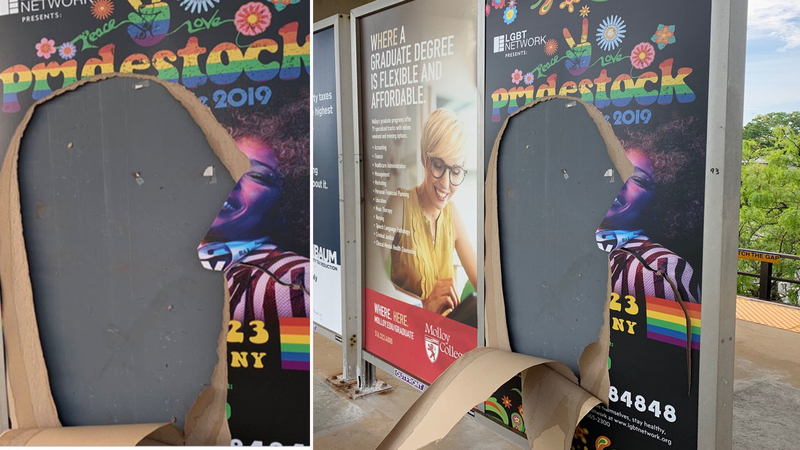 BELLMORE, Nassau County (WABC) -- Police and elected officials in Nassau County are voicing concern after an LGBT billboard was vandalized.

"It is fresh, it is new, it was targeted," Kilmnick said. "No question about it."

The LGBT billboard, which displayed information about the group's upcoming "Pride on the Beach" celebration, was ripped apart.

Officials said it is the third act of hate on Long Island against the LGBT community in recent months.

"We definitely intend to see what we can do," Nassau County Police Deputy Commissioner Kevin Smith said. "Find evidence, find video, find something that leads us to the person who's responsible for this."

They pointed out that hate crimes have surged across the country in the last two years, increasing 17% nationally and 30% in the New York Metropolitan Region, according to the Southern Poverty Law Center.

There was another sign not involving LGBT in the same general area that was also vandalized, but activists say the recent incidents are concerning. Back in April, gay pride organizers in Patchogue received a letter filled with name calling, suggesting a lawsuit so there could be a "straight pride" event.

"Following on the footsteps of Patchogue, this is no coincidence, I think," Kilmnick said.

The "Pride on the Beach" event brings tens of thousands of LGBT individuals and their allies to Long Beach each year.

And in the Town of Hempstead, where the pride flag was raised at town hall for the first time last year to support gay rights, officials promised resilience.

"Incidents like this will not stop Pride Week," Gillen said. "We'll be going forward with the full support of local government."

They say this festival will go on as planned, and that no one will be intimidated.

The MTA issued the following response:

"In response to requests submitted to @LIRR on Twitter this morning, the LIRR immediately removed the damaged advertisement and we are working with our advertising contractor Outfront Media to have it replaced as quickly as possible. The MTA and LIRR have no tolerance for discrimination. The MTA Police are investigating this incident, and notifying and sharing our investigative leads with the State Police Hate Crimes Task Force. Anyone who observes a possible hate crime should call the New York State hate crimes hotline, 1-888-392-3644."