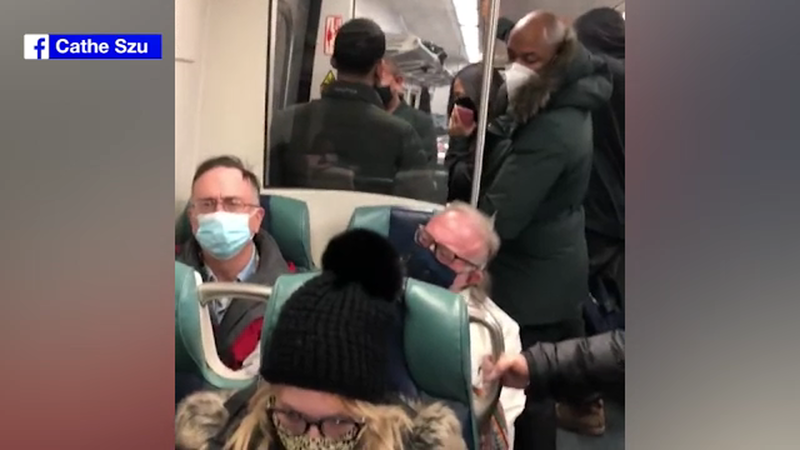 Four trains are being added to the Babylon branch as well as more stops to two trains from Speonk.

A total of three trains will be added between the Ronkonkoma, Port Jefferson and Hempstead lines.

"Today was the first day we implemented the new schedule and we are committed to continually adjusting as riders return," the LIRR said.

The Long Island Rail Road's new service schedule went into effect Monday and as a result, some customers reported crowding on trains.

Trains were running less frequently across all 11 branches.

After the morning commute, riders took to social media posting pictures of their crowded commutes.

Train intervals were hourly on many lines, creating for standing-room-only conditions. Normally, hourly service is what riders would experience on a weekend, not a weekday.

The railroad said that during peak hours, commuters would see more trains on the move.

Off-peak fares will remain in effect on all trains.

"The new schedules will provide continued service on all 11 branches, and will allow us to operate more efficiently while supporting critical infrastructure work, including rail tie replacement, construction of a new train storage track in Massapequa, and work related to the ongoing construction of a third track between Hicksville and Floral Park," the MTA had said about the schedule change.

Service was scaled back to align with a dip in ridership levels, which is down 76-percent from before the pandemic.

The LIRR said that the crowding was isolated to three trains, possibly a fourth, based on their data.

LIRR President Phil Eng released a statement on Rightsized Service: "In December 2020, the LIRR announced we would move service levels closer to current ridership and provide 75% of service for the current 24% of customers who are riding. The service change, which took effect this morning, was part of that previously announced effort. During this morning's rush, there were sporadic and isolated incidents of crowding on a few trains in the morning rush and we are prepared to add service during the p.m. rush as well as tomorrow morning to immediately address this issue. As always, we will continue to monitor ridership and make adjustments as necessary whether that is lengthening trains or adding additional service.

"We are grateful to Senate Majority Leader Schumer for his leadership in securing an additional $6.5 billion in federal funding for the MTA in the American Rescue Plan, which will allow us to avoid the drastic cuts to LIRR service that were being contemplated. Those cuts are completely separate from this rightsizing effort. The LIRR's capacity tracking feature is available for all customers to track capacity in real-time on the LIRR TrainTime app. We thank our customers for their patience."

Nick Zagoldin, of Glen Cove, said he couldn't believe how crowded his usual 5 a.m. train was on Monday morning.

"People were standing too," he said.

Zagoldin said he was not aware of the service changes and waited for another train 10 minutes later, which he said was pretty empty.

"They're taking the lives of people in their own hands so that they can run a skeleton schedule," he said.

Simon said the service cuts also don't help the economy which is trying to reopen.

"We're trying to get people back into the city. This is no way to do it," he said.

He said the next time the MTA makes a service announcement regarding LIRR service it should be in a positive direction.

In response to the earlier crowding, one train will be added to the late afternoon schedule from Penn Station to Ronkonkoma.

Tuesday morning a train in advance of the 5 a.m. train will be added on Ronkonkoma line and Babylon line.

The LIRR will also add more cars to a problematic morning train on Long Beach line.

Eng says this is all growing pains and more adjustments may be made including adding cars and/or service if riders start returning in larger numbers as businesses open up.

He says in some cases people simply didn't spread out in the trains. For example one morning train was at only 18 percent capacity. Most cars had only 5-10 people, but one car had 90. Eng is encouraging riders to check to see how crowded trains are before they get on either by looking onboard or through the app.