1 dead, 2 jump out window after fire tears through home in New Jersey 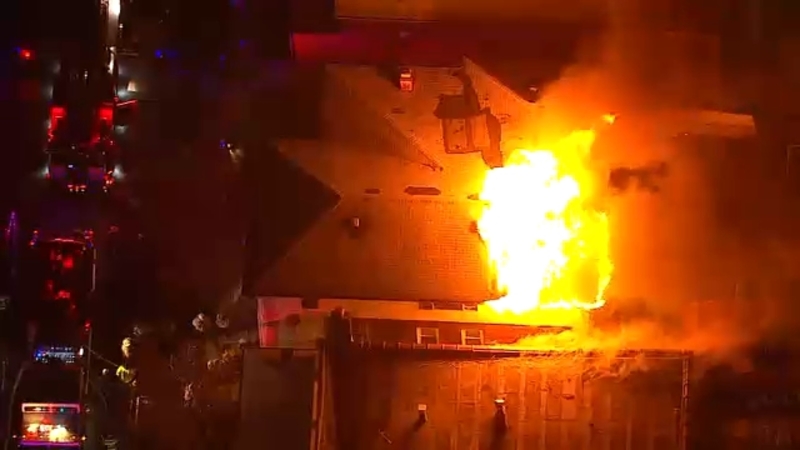 1 dead, 2 jump out window after fire tears through home in NJ

LODI, New Jersey -- One person is dead and two people jumped out a second-floor window to escape a two-alarm fire that tore through a home in New Jersey Monday morning.

The blaze broke out just before 6 a.m. inside the home on Westminster Place in Lodi, and huge flames could be seen shooting through the roof.

Authorities said two friends were staying overnight at the location, and neighbors woke up to the sound of windows breaking.

"I woke up around 10 to 6 with a loud boom, I thought it was a car accident to be honest with you," neighbor Mike Milliota said. "It sounded like glass breaking and a loud thud."

That thud was the sound of the two survivors hitting the ground. One was hospitalized with injuries to his head and arm, while the second suffered smoke inhalation.

Officials said it appeared they first tried to put out the flames with fire extinguishers but were unsuccessful.

The victim's mother and other neighbors tried to reenter the building to get to him, and police and firefighters attempted to gain access but said the fire damage was too extensive.

The victim, identified as 25-year-old Ezequiel Gonzalez, was later found inside after the fire was put out.

"I guess the flames were just too big," one friend said. "They couldn't get to him."

Gonzalez, who went by Zeke, was an MMA fighter in top shape, but he was still no match to survive the smoke and flames that rapidly engulfed the home.

The cause of the fire remains under investigation, but investigators said a candle might be to blame.