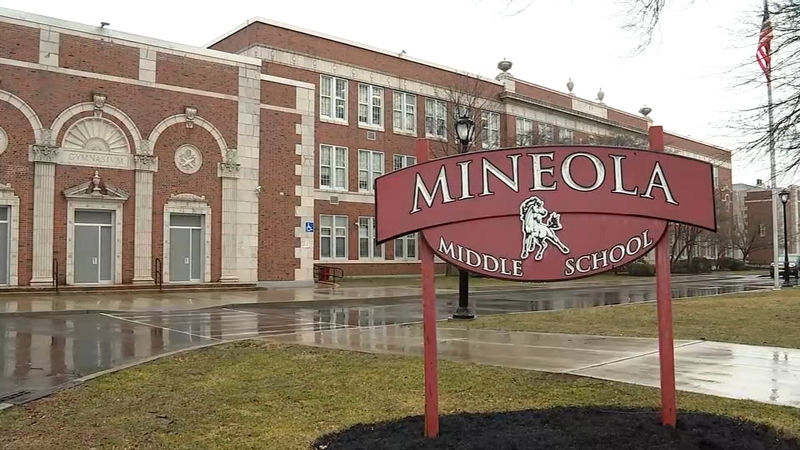 MINEOLA, Long Island (WABC) -- At dismissal at Mineola Middle School on Thursday afternoon, there was a mix of reactions to the news that one of the teachers is now being investigated for sexually inappropriate behavior. Some are urging this behavior went on for years.

"I asked my oldest son, who's now in 9th grade, I go, 'you know about this teacher?' and he said, 'yeah everyone knows about it. He was known as the rapist,'" said Robert Guastella.

In a Change.org petition, which has now collected thousands of online signatures, the author, a former student of the teacher, writes, "I, along with many other girls have been a victim of sexual assault. He had a lunch program called 'bon bon' where he gathered groups of kids and offered to buy us food, in return for us sitting on him while he lay on a bed of nails. We had all thought the bed and nails were really cool, so we had never thought anything of it."

The former student went on to say, "girls and boys asked to sit on his stomach, legs, waist and even on his face to see if we could pin him down."

And that student wasn't alone. Other former students started leaving similar comments dating years back. Eyewitness News is not naming the students or the teacher, since he has yet to face any criminal charges.

In a letter to parents, Mineola's superintendent writes that the district has now 'been made aware of the allegations and that the teacher was immediately removed from the classroom while a full investigation is being conducted.

Meanwhile, the parent of a girl in his class tells Eyewitness News that his daughter seemed shocked by the news.

"She said there was nothing that came across with her and her class," said Bill Lindsly.

Another former student said, 'the fact that this teacher still walks the halls of Mineola Middle School disgusts me."