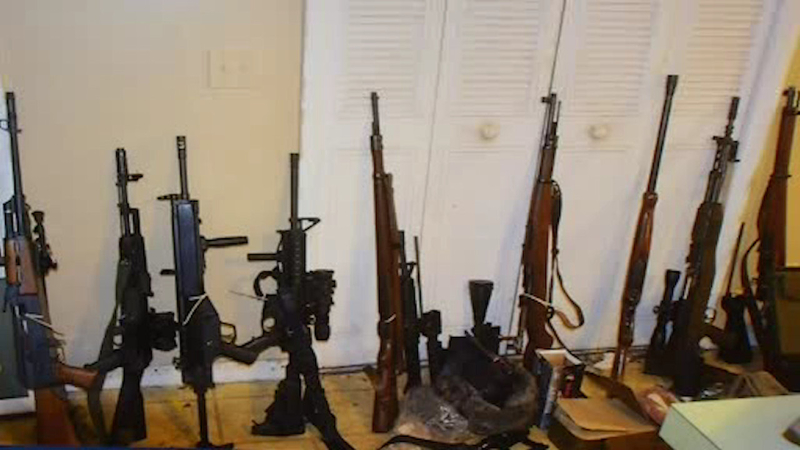 MOUNT SINAI (WABC) -- Drugs, weapons, bomb-making instructions and thousands in cash were seized during an early-morning raid at a home on Long Island Thursday.

Suffolk County Police Commissioner Timothy Sini announced that 29-year-old Edward Perkowski was arrested after the search warrant was executed at the residence in Mount Sinai around 6 a.m.

Nazi and other white power propaganda was found, as well as 10 assault rifles, a handgun, high-capacity magazines, marijuana and more than $40,000.

Officials would not say whether Perkowski had been planning any sort of attack. The bomb-making instructions were described as handwritten notes and printouts in a black binder.

"Ten assault rifles, a handgun, high-capacity magazines, a shotgun, a stun gun," Sini said. "This is the manual. We're not going to reveal the details at this moment. We are working with our law enforcement partners."

At this point, the suspect's motivations are unclear. He is charged with weapons and drug violations.

Perkowksi's brother Sean was also picked up on a different warrant unrelated to the guns and drugs.

Neighbors say they've been complaining to town officials and police for years about possible drug activity at the house.

"The house has been a known house," neighbor John Leonard said. "There's been a trouble of there for years. The police are there every couple of months."

But those who know the residents say they are bad news.

"I've been complaining about this for two and a half years," neighbor Brian Saltzer said, "I've been threatened to be shot. They actually did assault me, May 23 of this year."