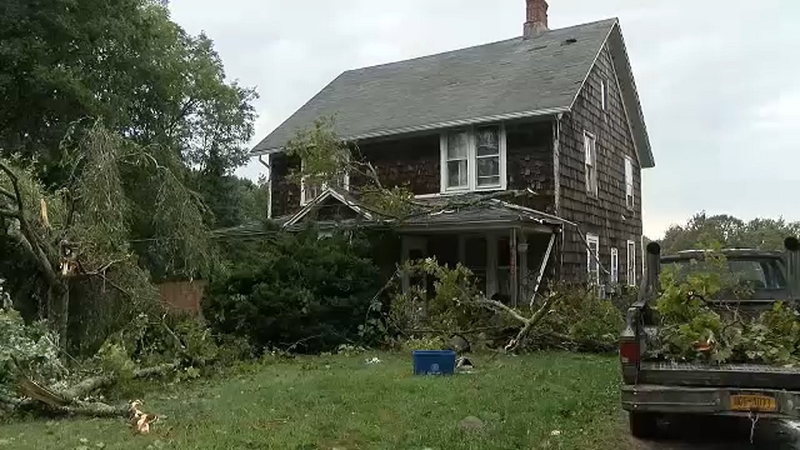 MANORVILLE, Long Island (WABC) -- The National Weather serviced confirmed a tornado touched down on Long Island Monday as powerful and fast-moving storms swept across the area.

The tornado first touched down on Dayton Street, about 400 yards south of the intersection of South Street and Dayton Avenue, shearing large tree limbs and the tops off of dozens of oak, maple and pine trees, as well as uprooting at least a dozen shallow rooted large trees.

Several electric poles were downed by falling trees on this block, with collateral tree damage noted to a few houses in the neighborhood.

The tornado continued northeast through the south end of neighboring Rosewood Street and then across its intersecting cross street of South Street. Several more trees were uprooted, large limbs broken, or tree tops sheared on this leg of its path.

Some houses on the north and south side of South Street had widespread tree damage and uprooting, and a shed was destroyed in this location as well, with damage to residences in the form of sporadic blown off shingles and siding, missing storm screens, and a couple of broken windows.

The tornado then continued northeast through a wooded area, where more tree damage was noted, before crossing the Long Island Expressway near Exit 69 while lifting. The path of tree damage and debris ended on the service road on the north side of the LIE near the intersection with Wading River Road.

The Caliguiris say their house shook, the wind howled, and the trees twisted until they snapped during 15 minutes of panic.

Right next door and across the road, it looked like just another summer night on South Street. But it was less than serene for those who are now cleaning up and rebuilding.

"Blown out windows from the wind, roofing tiles blown all over the place - big mess to clean up," Nicky Caliguiri said.

On Dayton Avenue, there were more patches of trees and downed wires.

"The power line popped right off," resident Steven Riegler said. "Sparks all over the place. Electric went out."