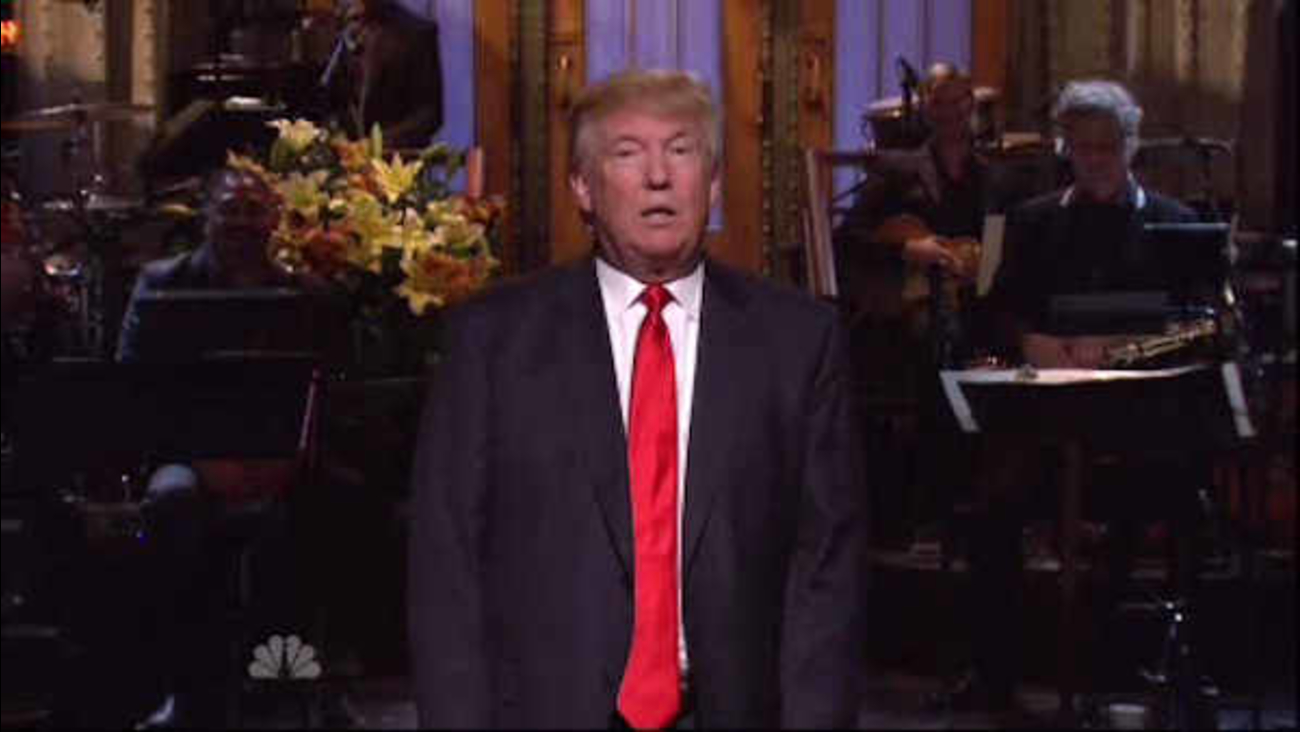 NEW YORK -- Donald Trump hadn't gotten far into his opening monologue before trouble occurred. An off-screen heckler interrupted with a cry of "You're a racist!"

But the "heckler" was comedian Larry David, who before Trump arrived on-stage had been seen impersonating Democratic presidential hopeful Bernie Sanders.

"Larry, what are you doing?" Trump asked with a trace of exasperation.

"I heard if I yelled that, they'd give me $5,000," said David with a shrug, echoing an offer made publicly by one of the Hispanic groups protesting Trump's appearance.

"As a businessman," Trump told him, "I can fully respect that."

Trump's 90 minutes in the "SNL" spotlight followed weeks of growing anticipation, increasingly sharp criticism and mounting calls for him to be dropped from the show. But the Republican presidential candidate hosted Saturday's "SNL" as scheduled. And, at least in NBC's Studio 8H, there was no more unrest - orchestrated or otherwise.

Demonstrators marched through the streets of New York City to protest Trump's views on immigration hours before the appearance.

Dozens of protesters held signs and chanted Saturday evening as they marched from Trump Tower to NBC's studio in Rockefeller Plaza.

There are probably 100-150 protesters across the street from 30 Rock to protest Trump hosting #SNL pic.twitter.com/Lh3FQhhH9z

Outside Rockefeller Plaza, they chanted: "Donald Trump has got to go."

Some of the protesters say Trump's statements about immigration are racist and offensive.

NBC has faced pressure from a coalition of advocacy groups calling for Trump to be dropped from SNL over his comments that cost him his role hosting "The Apprentice."

The network has not responded, and Trump says he believed the controversy would boost the audience for the episode.

During his monologue, Trump promised his hosting appearance would be "something special," while noting that many people had asked him why he accepted the gig. He said they had told him, "You're brilliant, you're handsome, you're rich. The world is waiting for you to be president. Why?"

His answer: "I had nothing better to do."

In one sketch, Trump was willing to mock his penchant for tweeting insults about people with whom he differs.

"I hate to break it to you guys," he told viewers, "but I'm not going to be in the next sketch." Instead, off-camera, he live-tweeted comments that were flashed on the screen about "SNL" cast members performing a skit:

"Cecily Strong is not a nice person."

"I love SNL ... SNL loves me. But everyone in this sketch is a total loser who can bite my dust."

Another sketch imagined Trump in the Oval Office in 2018 - two years into his presidency - savoring his many successes.

By then, Syria is at peace. China is borrowing money from the U.S. Trump's real-life daughter, Ivanka, is the administration's secretary of the interior, and announces the Washington Monument will be covered with gold.

Did it all sound too good to be possible?

"If you think that's how it's going to be when I'm president, you're wrong. It's going to be even better," Trump said, addressing the audience. "I said to the writers of this sketch, 'Keep it modest.'" His preference, he insisted, was to keep expectations low for his presidency and not overpromise.

Until Saturday, just eight politicians had served as guest hosts in the NBC sketch comedy series' 40 years. Only one of those - the Rev. Al Sharpton, in 2003 - was actively involved in a presidential bid at the time. (Hillary Clinton appeared in last month's season premiere, but not as the host.)

The star turn granted Trump fanned the flames of outrage sparked in June when he announced his Republican candidacy for president and described some Mexicans who are in the United States illegally as criminals and rapists.

Hours before the show's 11:30 p.m. EST Saturday start time, dozens of protesters marched from Trump Tower to NBC's studio in Rockefeller Plaza, chanting in both English and Spanish and carrying signs. In Spanish, they chanted: "The people united shall never be defeated" and signs declared SNL racist.

"I feel like they're giving him a platform," said Hazel Hernandez, 26, who emigrated from El Salvador and now lives in Brooklyn. "I'm an immigrant myself, so I'm pretty outraged. I've been in this country for many years, and I'm outraged that they would let him host SNL. It's upsetting."

Trump's comments last summer spurred NBC to sever its Miss Universe ties with him while declaring he would never return to his "Apprentice" role. But leading up to Saturday's broadcast, NBC did not respond to accusations that it had reversed itself, or to the outcry against Trump that had built since "SNL" announced his host booking last month.

Typically outspoken, Trump welcomed the controversy, predicting it would only boost his audience.

It wasn't Trump's first turn as guest host. The billionaire developer and media personality presided in April 2004, a few weeks after he debuted as host of NBC's "The Apprentice."

This time, while Trump demonstrated once again that he could take a joke, he was running for president. The sketches - both with and without him - seldom let the audience forget it.