Marchers say they oppose what they consider over-policing of the subway system.

Billed as a rally of emergency action against the NYPD and the MTA, a large group of young protesters made their way through Downtown Brooklyn for several hours.

"Police brutality against the criminalization of black youth in the subway system by police," they said.

One of the most recent incidents they point to is the fight that broke out last week at the Jay Street-Metrotech station. As police moved in to break it up, one of the officers can be seen punching 15-year-old Benjamin Marshall in the face.

"Me coming here, seeing them treat my brothers and sisters like that, that's making it my issue," said one protester.

Other students moved down into a subway station at Hoyt Street and confronted officers face to face. Others had clearly turned to vandalism, spray painting slogans and profanties on police and MTA vehicles, denounced by both the MTA and police.

Every time they were confronted by officers, they quickly turned and kept moving in another direction.

Earlier this week, Benjamin Marshall and his family announced a $5 million notice of claim against the city.

"He went down the Jay Street station to retrieve his bag and while he was there he was punched multiple times by one of New York's Finest," said Marshall's father Anthony Noel.

Police have placed the officer, assigned to the 84th Precinct, on non-enforcement duty as the investigation continues. 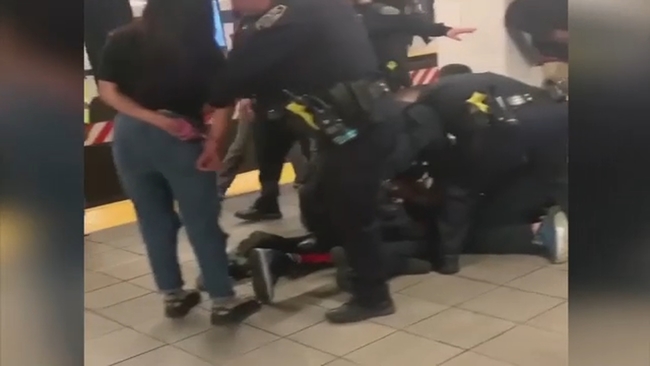