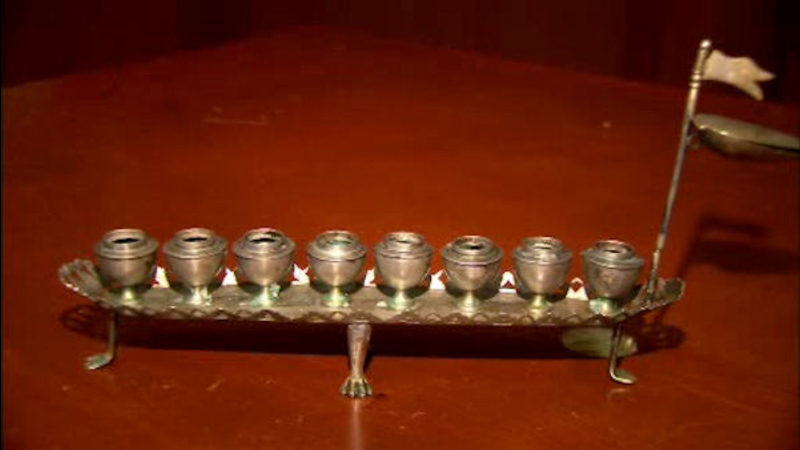 CEDARHURST, Long Island (WABC) -- Menorahs aren't just a symbol of Hanukkah. For many Jewish families, they are a symbol of family pride.

"In the old country, Jews were very, very poor," said Jonathan Greenstein, owner of J. Greenstein and Co., an auction house specializing in Judaica. "Some of them couldn't even afford a menorah, so they would slice a potato in half and dig out eight little holes and that was their menorah for the holiday."

You won't find any carved potato menorahs at the gallery in Cedarhurst. Some of the items part of the collection date as far back as 1650 and are worth more than a potato.

A Ukrainian menorah on display in the shop, a chiseled silver sheet placed on top of another and gilded, was made around 1840 and is valued at $200,000.

Greenstein started collecting when he was 14 years old. The historical characteristics to some pieces along with the whimsical nature of others were a source of admiration.

There's a reason for the wide variety in menorahs throughout the centuries.

"The Jews never really had their own style of art until the Bezalel School in 1907," Greenstein said. "So they basically took on whatever style where they were at that given time."

However, not all of these pieces go for exorbitant amounts. Many customers come in to the gallery to get an estimate on a family menorah, but do not part ways with it. Menorahs are a family heirloom that gets passed down from generation to generation.