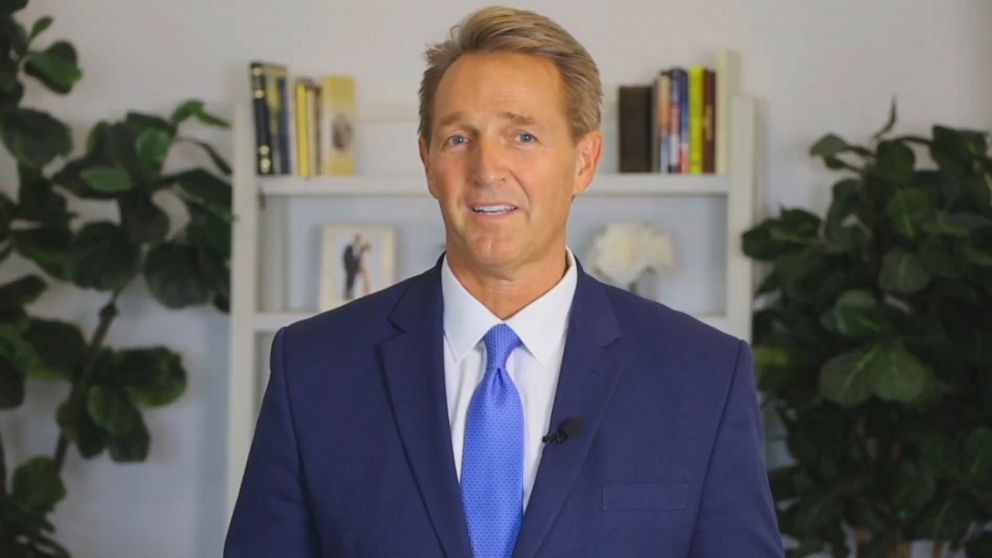 On the first day of the GOP convention Monday, Democratic nominees Joe Biden and Kamala Harris picked up support from 27 former GOP members of Congress, including former Arizona Sen. Jeff Flake, an outspoken critic of President Donald Trump before and after retiring in 2018 -- in the latest act of defiance from Republicans against the sitting president who represents their party.

"In a strong rebuke to the current administration, these former members of Congress cited Trump's corruption, destruction of democracy, blatant disregard for moral decency, and urgent need to get the country back on course as a reason why they support Biden. These former Members of Congress are supporting Joe Biden because they know what's at stake in this election and that Trump's failures as President have superseded partisanship," the Biden campaign wrote announcing the endorsements.

Later in the day, Flake personally addressed his decision to vote for the first time in his life for the Democratic candidate in a firm address aimed at his fellow conservatives.

In a blistering speech that focused heavily Trump's reputation and a Republican Party that Flake says has abandoned its conservative ideals, the former Arizona senator said he is endorsing Biden both because of his concern over Trump's conduct and his belief in the separation of powers in the Constitution.

"And so it is because of my conservatism, and because of my belief in the Constitution, and in the separation of power. And because I am gravely concerned about the conduct and behavior of our current president, that I stand here today, proudly and wholeheartedly, to endorse Joe Biden as the next President of the United States of America. America's best days are ahead. Go Joe," he added.

Attempting to lay out the case against Trump, Flake also sought to appeal to fellow conservatives by warning against simply supporting the party they have traditionally belong to under the control of Trump.

"If we are honest there's less of a conservative case to be made for reelecting the president, than there is just a blatant appeal for more rank tribalism and further division, and more willful amnesia in the face of more outlandish presidential behavior. I cannot and will not be a part of that," he continued.

Flake blasted the president on a number of fronts, both personally and on policy, denouncing Trump's claim that this year's election will be "rigged" before presenting the choice, as he sees it, to American voters.

"My fellow conservatives and Republicans who, like me, believe in the power of conservative ideas. Ask yourself: Will we be in a better position to make the conservative case for governing after four more years of this administration?" he said.

The former GOP senator and congressman also compared his endorsement of Biden to former conservative icon and presidential candidate Barry Goldwater's endorsement of Democrat Karan English for Congress in 1992.

"Can any of us stand here today and claim that our party has remained faithful to the conservative principles during the President's time in office? No, we cannot," Flake declared.

Some of the names on the list had previously announced their support for Biden, including former Pennsylvania Rep. Charlie Dent, who wrote an op-ed about his decision to endorse Biden last week, and former New York Rep. Susan Molinari, who spoke at the DNC with other Republicans.

Along with the endorsements, the Biden campaign is launching "Republicans for Biden," which they say will be a "national effort to engage Republicans who are supporting Biden this fall," and will "encourage Republicans to organize their communities for Biden using the Vote Joe app and other relational organizing tools."

It comes a few days after more than 70 former Republican national security officials, including some former members of the Trump administration, came out in support of Biden's bid for president last week, releasing an open letter that offered a scathing rebuke of Trump's first term.

"Through his actions and his rhetoric, Trump has demonstrated that he lacks the character and competence to lead this nation and has engaged in corrupt behavior that renders him unfit to serve as President," the letter released Thursday read.