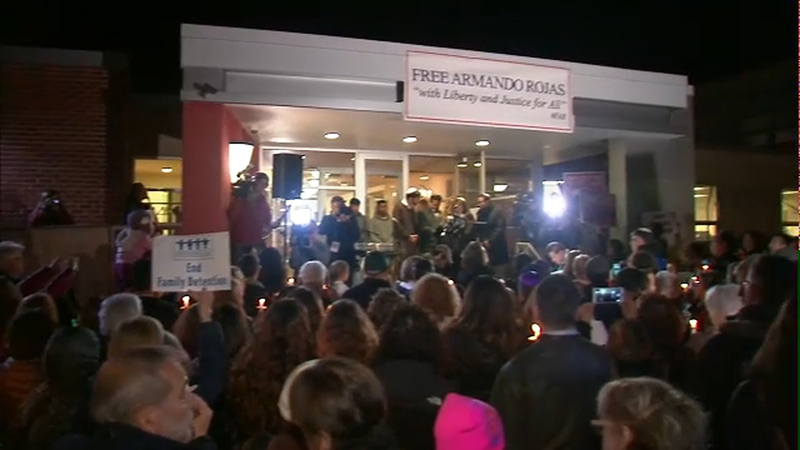 MOUNT KISCO, Westchester County (WABC) -- A synagogue and its rabbi are fighting for their long-time custodian who waits behind bars for his final appeal to avoid deportation to Mexico.

A rally was held Tuesday night in Mount Kisco to support Armando Rojas with his wife and two children.

Uprooted from the tight-knit community he has called home for 30 years, Rojas is praying for a breakthrough.

"I need my family, I need my son, my little son, my wife," he said. "Everyday I pray in the morning it's not my life. R ight now my life is in New York."

At Bet Torah Synagogue where he's worked as a custodian for the past two decades, dozens gathered Tuesday evening to shed light on what many feel is a blatant injustice, with Armando now facing deportation to Mexico save for a last appeal still pending before an immigration judge.

"To say he has no criminal record is to say it the wrong way." said Rabbi Aaron Brusso of Bet Torah Synagogue. "He has contributed more gentleness and kindness than most people do in their entire lives."

Armando came to the US without documentation when he was just 18 years old. He was arrested in February following a restaurant brawl he was later found to not even be a part of.

Rabbi Brusso and others have since been leading the fight for Armando's freedom.

"The hardest thing is to see his wife and his boys," said Brusso. "It's hard for me to understand how taking a father and earner out of a family and destabilizing them and causing them pain, creating dependencies, is in any way a social good."

And now with growing support and enduring faith, they're hopeful Armando's recent trials will eventually become a testimony of deliverance.

"We have a real dire situation in this country right now with families getting torn apart and I think it's important to understand the important contributions that immigrants make to our economy and to our culture," said Carola Bracco, Executive Director of Neighbors Link.