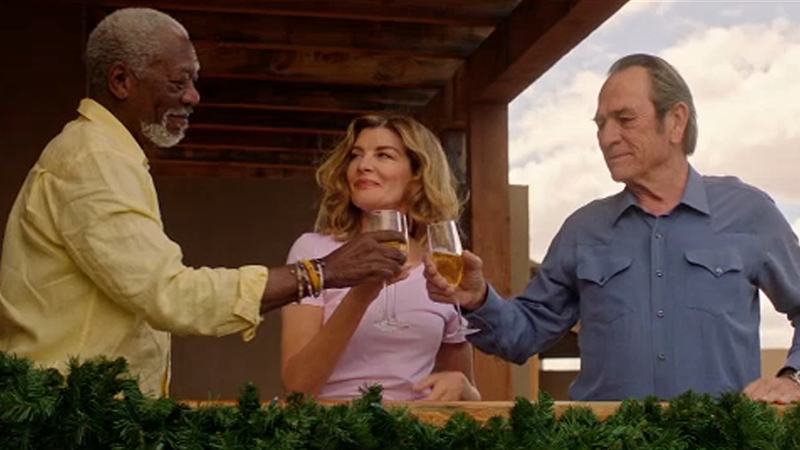 NEW YORK (WABC) -- I have a great job covering entertainment. At its best it doesn't seem like work at all. But at its worst, when a movie is a big bore, then reviewing it can be a chore!

It's Christmas time in Palm Springs, California, but a new movie starring Tommy Lee Jones and Morgan Freeman is no gift. This cringe-worthy comedy may be the worst movie of the year. And, I'm "Just Getting Started" slamming this unfunny film after suffering through 90 minutes that felt like nine hours: an ordeal made worse by the thought of so much talent wasted.

Leo, played by Jones, has just arrived at The Villa Capri Retirement Community where Duke, played by Freeman is top dog. Most of the time he's in charge of making life fun for the residents and fun for himself. He dates numerous women, that's when I cringed, until Rene Russo's character arrives to distract both men.

Turn out one of these aging alpha males has a big secret. "I was the star witness against the Mob," says Duke. "And, you went into Witness Protection," Leo surmises. A TV commercial starring Duke causes his perfect situation to unravel, and if that all seems stupid, then I assure you the actual movie is even more lame.

It's hard to believe this movie was made by Ron Shelton, a former minor league baseball player who made "Bull Durham," one of the definitive movie about the game. This is his first movie in 14 years to reach the big screen, and it's hardly a comeback. It was not screened for critics in advance, so I paid to see it so you wouldn't have to waste your own money. "Just Getting Started" should never have begun.