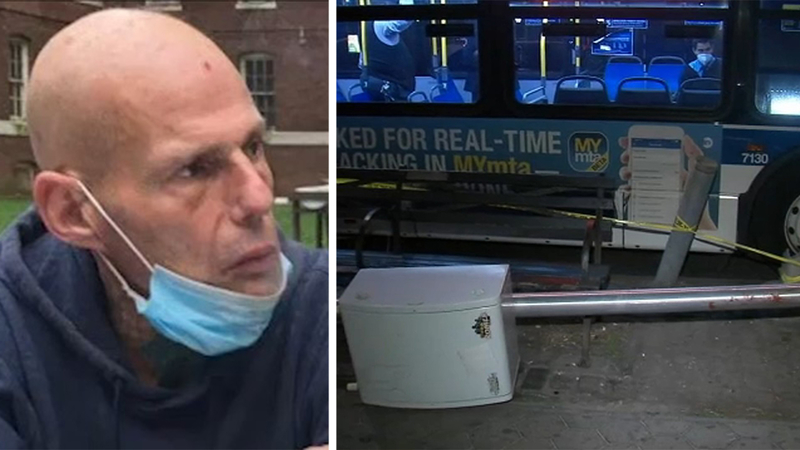 CROWN HEIGHTS, Brooklyn (WABC) -- A man who was struck by a pole that fell after being hit by an MTA bus in Brooklyn has died from his injuries.

Police say the MTA bus was trying to navigate around a disabled vehicle just after 7 p.m. on Thursday, April 8, along Eastern Parkway in Crown Heights.

It landed on 59-year-old Lance Margolin, who was simply in the wrong place at the wrong time, walking home from a birthday party with his wife, Karen Balestire, and friends.

"It was a freak accident," one of those friends, named Joanne, said. "All of a sudden, we heard a bang, so my friend grabbed me and held me until, and then looked, and then I said 'Oh my God, not Karen' because it was right by where her and Lance were standing. So I ran over, and it was Lance on the floor, and the pole was on top of him. My friend Steven picked up the pole, he lifted the pole, I don't know how, but he lifted the pole, and I was screaming for somebody to help him."

Margolin was rushed with head and body injuries to NYC Health + Hospitals/Kings County, where he passed away over the weekend.

"Just missed me and hit him," Balestire said. "I was right next to him."

Now, she will never be able to hold him tight again.

N.J. Burkett reports on the newest venue on Broadway -- a vaccination site.

"This is a tragedy for all involved," MTA Bus Company President Craig Cipriano said. "Our thoughts are with the victim's family as they deal with a terrible loss. We are fully cooperating with the NYPD's investigation, and the bus operator has been withheld from passenger service pending a thorough internal review."

For Margolin's loved ones, while it's difficult to process how he died, it's easy to understand and celebrate how he lived.

"He was a great guy," Balestire said. "He'd give the shirt off his back. He was just the greatest. He was so humble. He gave to everybody, even if he didn't have, he gave."

To further that point, Margolin is an organ donor -- one final act of giving, even in death.