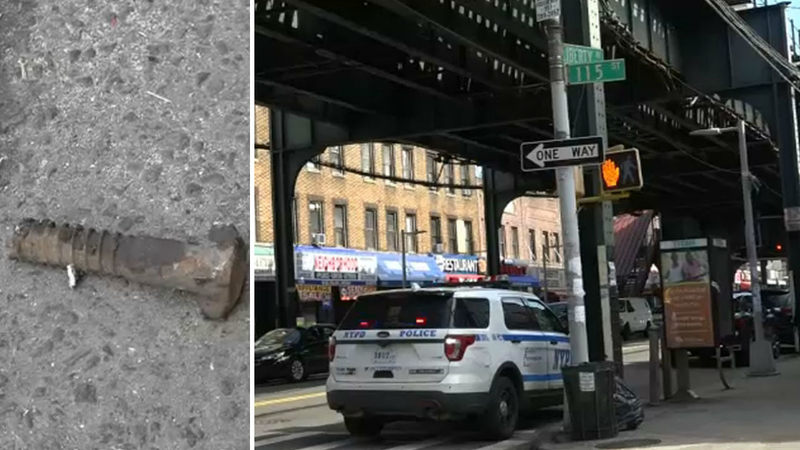 The most recent incident was reported Monday morning in South Richmond Hill, Queens, at the Lefferts Boulevard station.

A woman said a metal bolt fell from the A line onto her car below, leaving a dent, near 115th Street and Liberty Avenue.

"I was driving by going to the bank, and all of a sudden, something hit the car," Patty Jessel said. "It scared the **** out of me. I didn't know what it was so I pulled over."

She drove away and the MTA came out to investigate, but the news of yet another incident has people frustrated by what they call tracks that seem to be falling apart.

"It' s more than concerning as I have said, this is a public health crisis, this is an emergency," said New York City Councilman Jimmy Van Bramer. "We have no faith and confidence that the MTA has truly inspected every inch of elevated subway tracks in the city of New York. It isn't just the 7 line. It's all of the lines. And the fact that you have had four incidents in about four weeks goes to show you that unless the MTA starts to take this more seriously people are going to get hurt. Someone may die."

The MTA said they inspected the entire area and did not find anything was loose.

On Saturday morning, a man was driving on Fulton Street in Cypress Hills, Brooklyn when a chunk of concrete fell and left a crack in his windshield the size of a softball.

"Almost like an explosion to be honest. It was a loud boom," he said.
EMBED More News Videos

CeFaan Kim has the latest on the incidents of falling debris.

In response to all of the recent incidents, the MTA said they have intensified inspections of the tracks as a result.

MTA officials say the agency is taking these incidents seriously, even asking Chicago for help.

"We are reaching out to sisters agencies," said Transit Authority President Andy Byford. "Obviously a classic example would be Chicago because of the L. they operate a lot of overhead structure, to see if there's anything additional they do to what we do. But we will not let up until we put a stop to these incidents."

Just weeks ago, officials say falling debris from the 7 train nearly killed a driver in Queens on March 6.

A car driving on Roosevelt Avenue near 62nd Street in Woodside was struck by debris that fell from the elevated 7 train tracks above.

A portion of steel apparently broke loose and shattered the windshield of Fernando Marin's SUV.

"God was with us today," he said through a translator. Marin said it happened as he was driving to work with his wife and sister in-law.

"I want them to inspect the train tracks more often," he said. Thankfully no one was hurt.
And just weeks before that incident, wood fell from an elevated subway platform and pierced a man's windshield in Woodside -- just blocks away from the other incident.

It happened just before 1 p.m. on Roosevelt Avenue and 65th Street, also underneath the 7 train line.

Fortunately he was not hurt in the incident.

Eyewitness News reached out to the MTA for more information. They acknowledged they were looking into Monday's incident in South Richmond Hill and released the following statement:

"We obviously take any report like this seriously and sent a team to investigate. We didn't find anything abnormal at the scene - there was no debris on the ground, the track was inspected from both sides and all components were found to be secure. Our systemwide inspection of all elevated track structures continues."

They also said they walk the tracks to inspect them weekly and believe the structure remains safe for both trains to operate on and for the public in general.