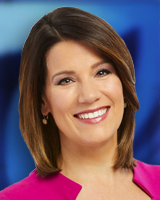 This week's MTA Hero is Alice Lowman, who sprung into action when she saw someone having a medical emergency on the train that she works on. Heather O'Rourke has details.

NEW YORK CITY (WABC) -- This week's MTA Hero sprung into action when she saw someone having a medical emergency.

On September 12th, MTA employee Alice Lowman was heading to work on the A train. Lowman saw a young woman sneeze multiple times, before her eyes rolled back and she fell.

Lowman quickly ran over to the woman, who had hit her head, and instructed another passenger to get the conductor's attention. EMS and the woman's mother were called.

"As a mom getting a call that something happened to your child is one of the scariest things. I'm beyond grateful to this woman that she was there. She called me several times first describing what happened and then following up with important details that I gave to the urgent care doctors," the woman's mom said.

Lowman even stayed with the woman until an ambulance arrived. The woman and her mother are expressing sincere thanks for Lowman's help.

Lowman has worked with the MTA for over 25 years.