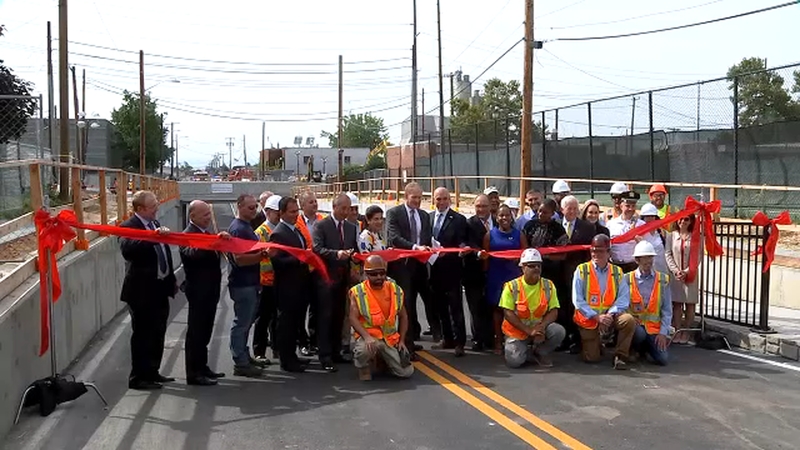 NEW CASSEL, Long Island (WABC) -- The MTA reopened the first of the Long Island Rail Road grade crossings closed as part of a major reconstruction project to make them safer -- so cars won't have to drive over railroad tracks.

A ribbon-cutting ceremony Thursday celebrated the reopening of Urban Avenue in New Cassel to vehicular and pedestrian traffic. The street-level crossing has now been replaced with an underpass, so cars will no longer have to cross the busy tracks of the LIRR's Maine Line.

The Urban Avenue closure came in March, one week after a triple fatal LIRR train crash in Westbury.


Previously, train after train would speed through the intersection at up to 80 miles per hour, forcing traffic to come to a complete stop every couple of minutes.

The accident happened when the victims' car drove around the gate, and their car was struck by a pair of trains traveling in opposite directions.

Since 2007, there have been nine fatalities at these grade crossings in question.

At the Urban Avenue crossing in particular, MTA police reported 120 calls for service in the past five years.

This is the first of eight grade crossings on the Main Line to be completed. Most will be finished in the next year.

The opening is part of a much bigger LIRR Expansion Project New York Governor Andrew Cuomo signed off on back in 2016, which includes a third railroad track being built between Floral Park and Hicksville that is set to be completed by the end of 2022.

This road, Urban Avenue, was closed for six months as this project was underway. However, the LIRR used new technology from Italy to push in the cement-and-steel railroad bridge -- weighing 3.5 million pounds -- for the underpass in just one weekend.