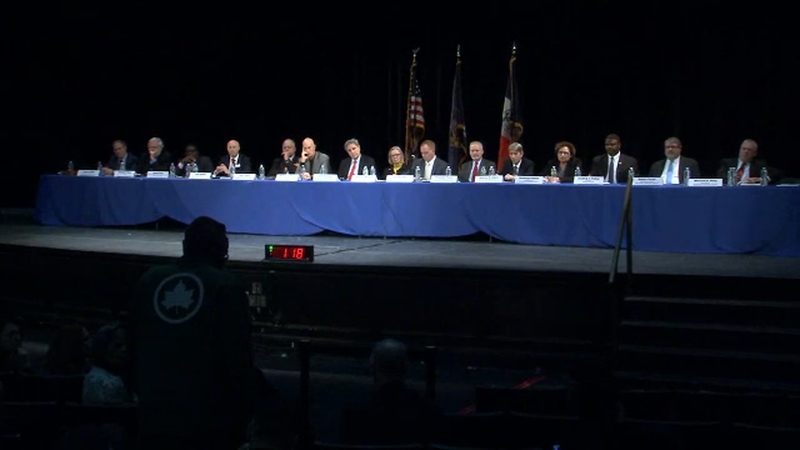 More hearings will take place at other locations throughout early December.

Dozens of people spoke out at the first hearing, all with the same complaint.

"We're paying you for something that doesn't work and doesn't get better, so what kind of sense does that make?", one rider said.

The agency has laid out two options, the first of which would keep the base fare for subway and bus rides at $2.75 but would more sharply increase weekly and monthly passes.


The MTA also said it will cut $41 million from subway and bus service in 2020, under "service guideline adjustments."

"We dont want to go down this road," Transit Authority President Andy Byford said. "We absolutely do not."

The MTA says the extra money is needed to keep the system running adequately.
The MTA is in serious financial deficit, and officials say that even with a 4 percent fare and toll hikes for 2019 and 2021, the MTA is forecasting nearly a $1 billion budget gap by 2022.

If there is no 4 percent fare and toll hike, "We're just going to make the hole that much bigger," MTA finance chief Bob Foran said.

"There are two proposals on the table but those aren't the only two proposals," said acting MTA Chairman Fernando Ferrer. "We want to hear from the riding public because this affects their everyday lives and in fact the last time we did this, it was a proposal made by members of the riding public that changed the outcome of our deliberation."

Abi Farrell walks fifty blocks round trip, from Penn Station to her classes at John Jay College, avoiding the subway because her LIRR ticket is already so expensive.

Bus and subway ridership is down, with possible reasons including late night and weekend tracks work, competition from ride-share apps, fare evasion, E-commerce and telecommuting.