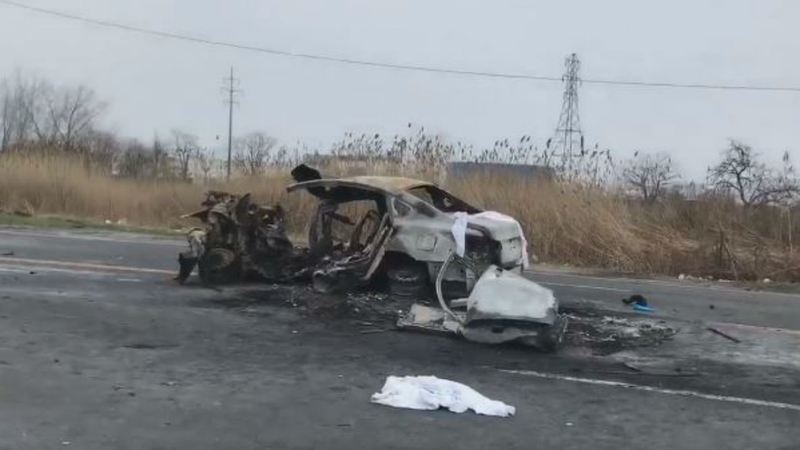 The violent crash left the roadway littered with car parts and battered hunks of metal, leaving investigators with a difficult task.

"You have five vehicles, over 800 feet of debris, you have oil, you have gasoline on the roads, thousands and thousands of car parts," said Nassau County Police Detective Lieutenant Richard LeBrun. "We have one car that the engine actually came out of the vehicle."

The people who died, a driver and passenger, were trapped when their Nissan Altima burst into flames on impact during the crash around 1:42 a.m.

Five others were seriously injured. Of those, two have been charged with DWI.

The two, a man and a woman, were driving in separate cars, apparently in the same direction.

It was not immediately clear whether either driver - or both - caused the chain-reaction crash.

Investigators would not say whether they were speeding or drag racing, although that would not be unheard of along this stretch of the Nassau Expressway.

"It's one of those areas that we do frequent because of the fact that people do speed in certain areas," said LeBrun. "The factors will be speed that they'll look at, they'll look at weather conditions and many other factors."

The Nassau Expressway was closed in both directions from Burnside Avenue and Bay Boulevard while investigators looked for the cause of the accident.

The identities of those involved in the crash have not yet been released.