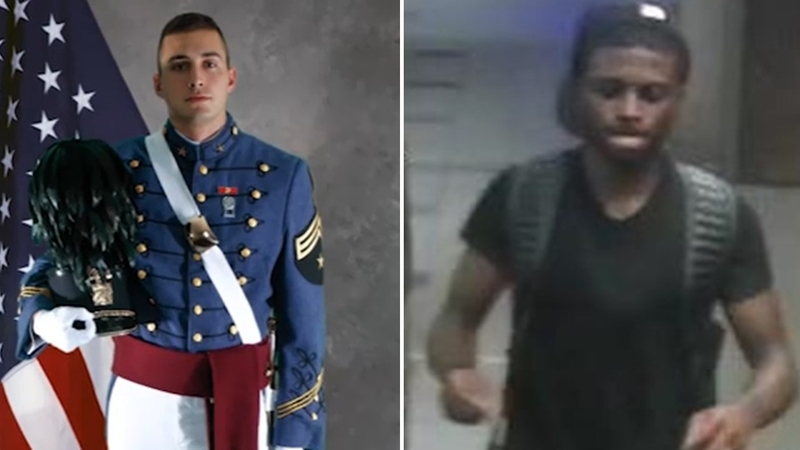 TIMES SQUARE, Manhattan (WABC) -- There is new video of the gunfire between street vendors that struck an innocent 21-year-old Marine who was visiting Times Square from Upstate New York.

Police say the victim, identified as Samuel Poulin, was not the intended target.

The shooting happened Sunday evening near 1535 Broadway, at Seventh Avenue and 46th Street, where authorities say a group of five or six CD vendors was arguing under the Marriott Marquis sign.

WATCH | Police have released video of the suspect in the shooting:
EMBED More News Videos

One pulled out a gun and fired a shot, and Poulin -- with his family just a few feet west under the Starbucks sign -- was grazed in the back.

The bullet was visible and did not pierce through his body, and he suffered non-life-threatening injuries and was taken to Bellevue Hospital.
EMBED More News Videos

An eyewitness captures the moment a 21-year-old man was carted off in a stretcher after a shooting in Times Square.

"The Citadel family - in Charleston, South Carolina and around the world - is greatly saddened to learn about what happened to our Class of 2021 graduate, 2nd Lieutenant Samuel Poulin in Times Square on Sunday when he was hit by a bullet from a shooting event unrelated to him," Citadel President Gen. Glenn M. Walters said in a statement. "We are encouraged that he is reported to be in stable condition are sending our prayers and our love to his new wife and his family. 2nd Lieutenant Poulin holds a Bachelor's Degree in Physics, was a President's List cadet and exemplifies the kind of principled leader The Citadel strives to produce."

No one else was injured in the shooting, and no arrests have been made.

"It is just an unacceptable state of affairs," he said. "This is a place that is precious and so important to New York City. It has to be safe, so we are adding additional officers."

He added that they would be stepping up enforcement against illegal vendors as he and NYPD Chief of Detectives Rodney Harrison announced the "Times Square Safety Action Plan."

"The bottom line is we are going to flood the zone in Times Square with additional officers to make sure this situation is resolved once and for all," de Blasio said.

"We wish Samuel Poulin a speedy recovery and thank him for his service to our country," he said. "Times Square is a reflection of the city to the world, and this latest incident is the result of policies that do not focus on the enforcement of lower-level offenses and embolden would-be criminals to carry weapons. We need sustained and effective tactics by all agencies and to provide law enforcement with the tools and support necessary to accomplish our shared goal of safety in our communities and town squares, and we need it now."

Brooklyn Borough President and Democratic Mayoral Candidate Eric Adams also released a statement saying, "The news of another shooting in Times Square, in broad daylight, is a chilling reminder of the rising threat of gun violence across our city. The spike in victims and incidents are not just statistics on a report; the trauma and bloodshed are real. We cannot have a real economic recovery from COVID-19 if our centers of business and tourism are perceived to be unsafe. More importantly, we cannot recover this epidemic of gun violence that is disproportionately striking communities of color if we do not get these illegal guns off our streets. The leaders of this city, both now and going forward, must be committed to both the intervention and prevention measures needed to save lives."

With most COVID restrictions lifted, the curtain was lifted on the first Broadway show with 100 percent capacity.

The last shooting in the Times Square area was on June 5, 2021, on West 37th Street and Sixth Avenue.

Back in May, a shooting in this same area of Times Square wounded two women and a 4-year-old girl.

A suspect was later arrested in Florida.