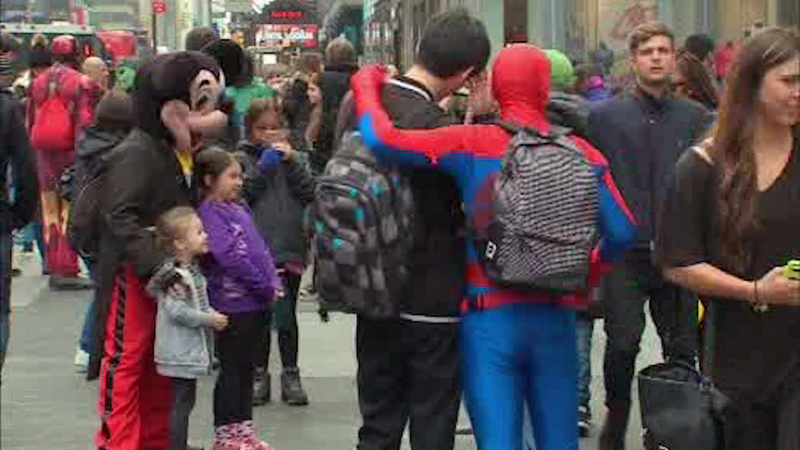 TIMES SQUARE (WABC) -- Costumed superheroes and villains found common ground at a New York City council hearing on Wednesday, with the likes of Spider-Man, Penguin and the Joker all testifying against proposed rules designed to limit run-ins with tourists in pedestrian plazas including Times Square.

The legislation to allow the city's Department of Transportation to create regulations for plazas comes after scores of complaints in recent years over aggressive panhandling behavior, primarily from the costumed characters pushing onlookers for tips.

Keith Albahae, with his Joker-green hair and purple suit, told members of the council's committee on transportation that he was the one who had experienced harassment. "I've been spit on, and I defended myself by spitting back," the 49-year-old from Brooklyn said.

The Times Square Alliance is demanding changes to the pedestrian plazas.

"These are totally unsolicited tweets and posts that we get all the time everyday from people who have negative experiences in Times Square," said Times Square Alliance President Tim Tompkins.

At a rally outside City Hall, dozens gathered to express their support for the bill that would limit Elmo, Batman, and the topless women to dedicated zones monitored by the Department of Transportation and police.

City officials say this isn't about eliminating people's job, it's about stopping unwarranted and aggressive solicitation.

"The pedestrian plazas have helped to protect people from the crush of traffic but they also have increased the space for solicitors of every type to simply take over Times Square," said City Councilman Daniel Garodnick.

"We really look forward to having a public dialogue with all the affected parties," said Department of Transportation Commissioner Polly Trottenberg. "We will also be having a public hearing I'm sure. We will be talking to the vendors, the characters, council members etc."

The City Council says it hopes to pass the bill by summer. They don't want to change the character of Times Square; they just want it to be quirky, not creepy.