Whale in the Hudson River spotted again along Upper West Side

WABC
By by Bob Monek 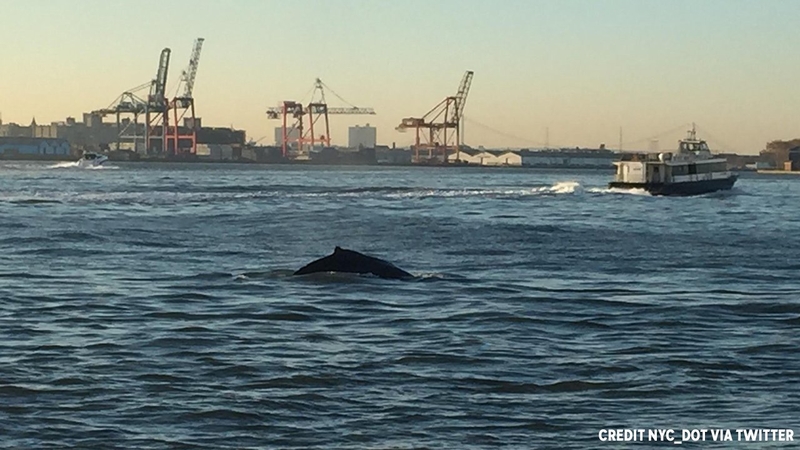 Whale spotted in the Hudson River

NEW YORK CITY (WABC) -- A whale in the Hudson River made another surprise appearance Sunday, this time along Manhattan's West Side.

The whale was spotted just after 2 p.m., breaching off 96th Street.

Authorities warned mariners to watch out for the large mammal, and to avoid all contact with it.

Experts say whales are migrating south, but have stopped in our area because of the food supply.

Dr. Howard Rosenbaum at the Wildlife Conservation Society told Eyewitness News that the whale on Thursday was likely a humpback, which stay close to shore between Fire Island and Brooklyn and are most often seen by people.

While the humpback whale is most often seen, different species of whales have been spotted or detected with increasing frequency in New York waters near the Verrazano-Narrows Bridge and just off the coast between Long Island and New Jersey in recent years.

After multiple sightings of a whale around the waters of NYC -- we want to know -- what would you #NameTheWhale ??? pic.twitter.com/cgw8gzMpQZ

We asked you to #NameTheWhale spotted on the Hudson, and you did! Now it's time to vote on the newest New Yorker's "official" name!

The Wildlife Conservation Society is working with the Hudson River Foundation, the shipping industry, federal, state and local officials among others to learn as much as they can about whales in the area waters and why they are here.
Related topics:
sciencenew york citywhalewhale watchingocean conservation
Copyright © 2022 WABC-TV. All Rights Reserved.
TOP STORIES
Man dies after collapsing at finish line of Brooklyn Half Marathon
Heat Advisory issued ahead of possible record-breaking temperatures
AccuWeather: Record high temperatures possible
Some peanut butter recalled for potential salmonella
Why a NJ teacher keeps an empty chair in his classroom
NYC to mark Biggie Smalls 50th birthday, MTA unveils special MetroCard
Weather for Preakness could be hottest in history of race
Show More
Police: Missing LI teen may have taken train, traveled outside NYC
First formula flights from Europe to arrive this weekend
College students invent edible tape to keep burritos, wraps together
Dog battles mountain lion to save owner's life
Crowded field for 10th district as judge approves congressional maps
More TOP STORIES News