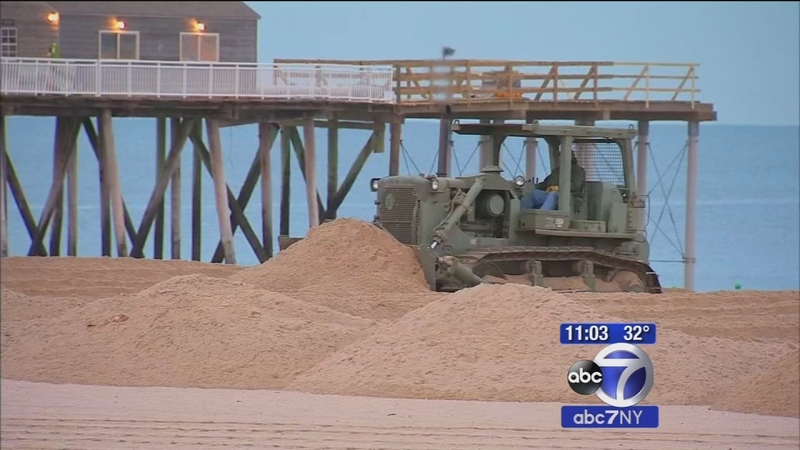 Sand dunes being built up in Belmar ahead of winter storm

NEW YORK (WABC) -- The New York area is bracing for a nor'easter with the potential for the first significant snowfall of the winter, and Tri-State area cities and towns are gearing up in anticipation.

The New York City's Office of Emergency Management on Wednesday launched a new public service video announcement with the New York Islanders to prepare residents, who were wasting no time gathering supplies in case the Big Apple gets buried.


And along the coast, particularly in New Jersey and on Long Island, flooding is a major concern. The mayor of Belmar even tweeted a photo of dunes being built ahead of the storm.

Building dunes on the Belmar beachfront today in anticipation of a significant storm surge this weekend. pic.twitter.com/U7XBrinnmO

"So that's why we have our bulldozers building and also strengthening dunes for 1.3 miles up and down the entire beachfront here," said Matt Doherty, Mayor of Belmar.

They plan to do the same on Thursday in Bradley Beach. There is a storm preparation meeting set for Thursday afternoon in the borough.

"Our main concern is a storm surge of some type on the north and south end of the town because that's where we have two bordering lakes," said Chief Len Guida, Bradley Beach Police Department.

The first threat of major snowfall might be coming a little later than usual, but it is certainly a familiar drill for the entire northeast.

Employees at the Lowes in Downtown Brooklyn say they expect shovel-snatching crowds will only grow between now and the weekend.

Meantime, things are bustling inside the city's OEM office. It is the nerve center for New York's storm response, where snowfall amounts, high winds and coastal flooding will be closely monitored.

"We want to make sure every New Yorker has a plan for winter weather and is fully prepared in case of a storm," Mayor Bill de Blasio. "From our elderly residents to our youngest students, we want to keep every New Yorker safe and warm through the coldest months."

OEM communicates directly with the public through a variety of tools, including Notify NYC. In addition to sending e-mails, text messages and phone calls, the emergency notification office has the ability to activate NYC's Emergency Alert System (EAS), which sends information immediately via television and radio. Residents can also visit Facebook, Twitter, and the agency's website, NYC.gov/OEM for more information. The public can sign up for Notify NYC by calling 311 or going to NYC.gov/notifynyc.

On Long Island, storm preps have been underway for months, with most beach erosion prep work having taken place in the fall.

New York State Parks regional director George Gorman says there is just the right amount of sand to weather a storm like the one headed our way.

And just in case, they have huge piles of sand standing by.

"Whenever there's a nor'easter, we're concerned," he said. "But we have built up the beaches here at Robert Moses. We are ready for any kind of an erosion event. If we do have to react, we will react quickly with the stockpiles of sand that we have."

Also in Suffolk County, police spent the day positioning new humvees that they acquired from the military to be used in storms just like this one.

"Part of our storm preparations is we send these humvees out to each precinct, and the police officers can respond no matter how bad the conditions get," Chief Stuart Cameron said.