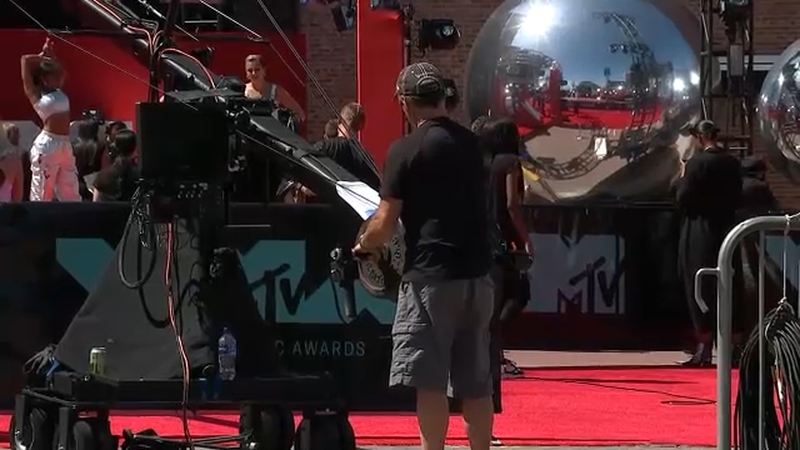 Mayor Ras Baraka and Public Safety Director Anthony Ambrose asked that downtown businesses consider early dismissals or even allowing employees to work from home because the event at the Prudential Center.

"We'd like the downtown businesses treat this like a major blizzard, except we know it's coming a few days in advance," Ambrose said. "It would be a mistake to underestimate the impact the VMA Awards are going to have on the downtown and the main roads in and out of the city...We are trying to spare people the aggravating gridlock, both coming into work and leaving," Ambrose said.

Ambrose encouraged commuters to use mass transit and businesses to either stagger hours or allow employees to work from home.

The morning commute was severely impacted by the closing of Mulberry Street from Lafayette Street to Market Street, the stretch of road that runs in front of the arena.

"That's a main morning artery, especially for parking," Ambrose said. "That closure will push more traffic onto Broad Street and McCarter Highway, so everyone should be aware the morning commute will tough."

The Mulberry closure was then extended from Green Street to Raymond Boulevard and will remain closed at least until 2 a.m. Franklin Street will also be closed.

"We cannot stress enough the impact that this event will have on downtown traffic and traffic around Penn Station," Ambrose said. "We will have many traffic control officers in place, but they can't stop gridlock if employers and employees people don't heed this advice and either take mass transit, stagger hours, or let people work from home."

Ambrose also spoke about heightened security and police presence around the event, also noting "there will be continued robust police coverage citywide thought each of our seven precincts."

"We look forward to seeing our residents and visitors enjoy the Video Music Awards and all that the City of Newark has to offer," Ambrose said. "We want everyone to celebrate safely and responsibly, and encourage people to download the Newark Police Division App onto their cell phones to receive alerts and to report crimes or other suspicious activities.

Monday, August 26th, from 4 p.m. to 2 a.m.
--Bus lane and northbound lane of traffic on Broad Street, from Green Street to Market Street

Monday, August 26th, from 10 a.m. to 2 a.m.
--Westbound lane of traffic on Lafayette Street, from McCarter Highway to Broad Street