WABC
TOMPKINSVILLE (WABC) -- New York City Police Commissioner William Bratton has ordered a thorough review of the NYPD's training procedures in the aftermath of the death of Eric Garner, the man who was held in an apparent chokehold and died as police attempted to arrest him last week.

At a news conference Tuesday, Bratton said the NYPD will conduct a "top to bottom review of all of the training this department provides to its personnel, specifically focusing on force, how do we train our officers for a takedown, how do we train them to use the various levels of force that they're authorized to use."

Bratton said he anticipates there will be a retraining of the entire 35,000 member force in the future. He said when the retraining is done, the NYPD will have "state of the art" training for officers nationally.

Bratton also met Tuesday with the FBI, which is now monitoring the investigation into the case and said he would "not be surprised" if the U.S. Attorney decides to open a civil rights investigation.

Family, friends and community leaders held a vigil Tuesday night and demanded justice, gathering at a park near where police tried to arrest Garner.

Meantime, we are now learning more about the missteps taken by 2 EMT's who arrived on the scene when Garner was unconscious.

Two EMTs and two paramedics are now all suspended without pay by Richmond University Medical Center as the hospital conducts its own internal investigation.

"I can't breathe," Garner is heard saying in a video shot by a bystander.

They were the desperate words of 43-year-old Eric Garner as cops slammed his face into a Staten Island sidewalk seconds after officers, one using an apparent chokehold, wrestled the asthmatic diabetic to the ground last Thursday.

Eyewitness News has learned that one of the NYPD sergeants on the scene later told investigators, "She believed she heard the perpetrator state that he was having difficulty breathing." But she also downplayed Garner's condition, saying, "The perpetrator's condition did not seem serious and he did not appear to get worse."

"Reasons he could have been unconscious, because of a neck injury, a head injury, a lack of blood to the brain, a lack of inability to breathe while on the ground," Dr. Kuehl said.

Dr. Kuehl was also surprised the first medical technician on the scene simply checked Garner's pulse. A few minutes later he was heaved onto a stretcher and then suffered cardiac arrest.

"What she didn't do, oxygen, check his airway, put a cervical collar, she didn't do the routine of what she was supposed to do," Dr. Kuehl said.

"The ambulance was right down the block, but the police said 'not yet,'" explained Giordio Dano.

Dano just happens to be a registered nurse and was down the block Thursday afternoon when he spotted a commotion on the Staten Island sidewalk.

Dano says he can't believe what he saw.

"I would have flipped him over, checked his pulse and performed CPR, and get the ambulance here right away," he said.

"He was on the ground for a good ten minutes, no response whatsoever. When they put him in the gurney and put him to the side, EMS was stopped right there because they were trying to work on him," said Taisha Allen.

Witnesses say they pleaded with EMS workers to do more than check Garner's vital signs.

"We even screamed at them and told them, why are they concerned with putting him in the ambulance when they can do CPR right then and there," said witness Ramsey Orta. Orta recorded recorded Garner's arrest and takedown on his cellphone.

Several minutes had gone by before he says Garner was taken away on a gurney.

The mother of Garner's youngest child, who is just 3 months old, says she can't bear to watch the videos of the incident.

New York City Mayor Bill de Blasio Monday told reporters that - as a layman - he thought a chokehold had been employed by a cop during the incident.

"As an individual who's not expert in law enforcement, it looked like a chokehold to me. But I also emphasize you have a full investigation because all sides need to be heard and all evidence has to be looked at," de Blasio told reporters trailing him on vacation in Italy. Audio was provided to reporters in New York by the mayor's office.

The mayor left on Saturday night, after postponing his departure for a day to deal with the developing firestorm over Garner's death.

Garner, an asthmatic, was pronounced dead an hour after his arrest. Authorities said he died of a heart attack, but autopsy results have yet to be released.

Previously, the NYPD took the gun and badge away from the officer who placed Garner in the apparent chokehold. That officer, Daniel Pantaleo, an 8-year veteran, has been placed on "modified assignment," pending the outcome of the dual probes by the district attorney and Internal Affairs.

Garner was confronted by police trying to arrest him on suspicion of selling untaxed, loose cigarettes on a Staten Island sidewalk, authorities said. The 6-foot-3, 350-pound Garner became irate, denying the charges and refusing to be handcuffed. A partial video of the encounter obtained by the New York Daily News shows one officer wrap his arm around Garner's neck as he is taken to the ground.

Asked about the ongoing probe and controversy de Blasio left behind in New York, the mayor said: "There's an internal process and I respect that process. The fact is that Commissioner (Bill) Bratton acted, having looked at the facts. It's quite clear the chokehold has been prohibited for decades, but I leave the specific actions within the police department to Commissioner Bratton. I have absolute faith in his judgment. I think the actions that have been taken show that there is a serious commitment to a full investigation."

In the video obtained by the Daily News, Garner, who has been arrested for selling illegal cigarettes numerous times in recent years, says he hasn't done anything wrong.

"Every time you see me, you want to mess with me. I'm tired of it. It stops today," Garner shouts. "I'm minding my business. Please just leave me alone."

As four officers bring him down, Garner is heard gasping, "I can't breathe! I can't breathe!" The video shows one officer using his hands to push Garner's face into the sidewalk.

Garner's family, along with Sharpton and his National Action Network, claim Garner repeatedly said he could not breathe while officers used excessive force to hold him down. Then he fell unconscious. Garner went into cardiac arrest and was transported by EMS to Richmond University Medical Center, where he was pronounced dead on arrival. 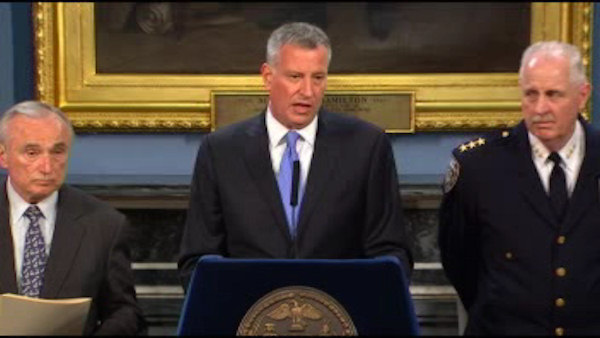 A funeral for Garner, who went by the nickname Big E, will be held Wednesday at the Bethel Baptist Church in Brooklyn. Another rally on Staten Island is planned for Saturday afternoon. 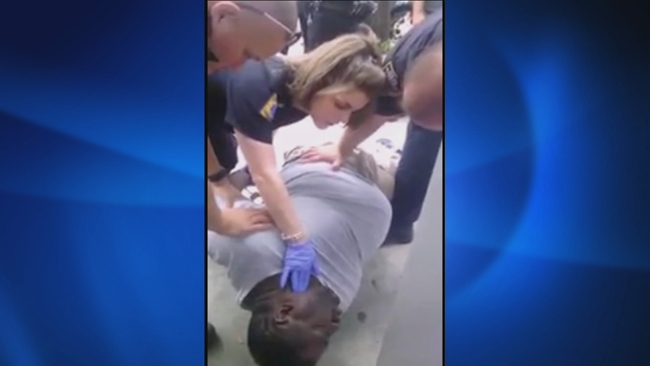 Details emerge on EMT's and paramedics at scene of Garner's arrest 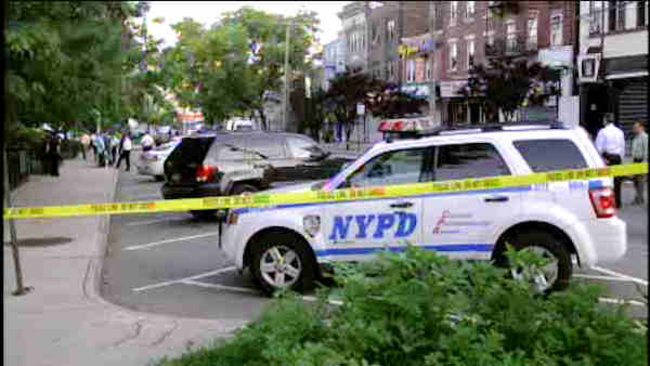