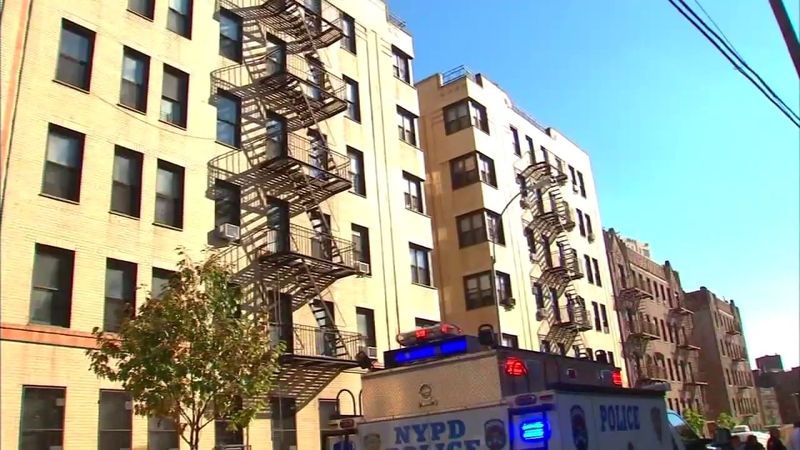 BRONX, N.Y. (WABC) -- A 6-month-old girl who was rushed to the hospital in cardiac arrest after she was thrown out window in the Bronx Thursday died.

At 1:49 p.m. Thursday, on Tiebout Avenue in the Tremont section responding officers rushed a child, identified as 6-month-old Janillah Lawrence, in a police cruiser to St. Barnabas Hospital, where she was pronounced dead at 2:28 p.m.

Officers detained the girl's 27-year-old mother, Tenisha Fearon, at the apartment where they found three other children. She was charged with second-degree murder and is described as emotionally disturbed and was transported to Bronx Lebanon Hospital for evaluation.

Fearon was remanded to jail Friday morning during her arraignment; her case was adjourned until Oct. 21.

RELATED: What we know about the mom accused of throwing baby to her death

Deputy Chief of the Bronx District Attorney's Office Rene Aponte said the 6-month-old was naked and alive when she was dropped out of the sixth floor window as Fearon's three other children, ranging in age between 4 and 10, watched in horror.

The judge ordered a psychiatric exam for Fearon, as well as medical attention and protective custody in jail. Fearon was quiet throughout the appearance.


Witnesses reported her dangling the infant out the window, shouting about the devil and that the world was going to end. Some yelled at her not to drop the child.

"And then that's when the neighbors started screaming, 'No, no, no, no,' and they started screaming," neighbor Lizette Rodriguez said. "They were yelling at her, 'Don't do it. Think about it.' And there were people who stopped, but she wasn't...'I'm going to throw the baby out the window,' and she was screaming, 'We're all gonna die.' And that's when I figured, 'OK, this is time to call 911.'"

Many people saw the incident, and said it seemed to unfold in slow motion. They said they saw a woman, allegedly Fearon, screaming about God, Satan and at the end of days, as she threw things out her sixth floor window. Finally, she held her own 6-month-old daughter.

While Rodriguez was dialing, she said she heard the horrific and sickening thump. The other children -- a 4-year-old girl, 8-year-old girl and 10-year-old boy -- were also in the apartment, along with another parent. The children were not injured, but they were taken to St. Barnabas for precautionary evaluation. They were found lying in a circular pattern on the floor.

Fearon had been a family day-care provider, licensed to run a facility from her Bronx apartment for two years.

Fearon got the child care permit on May 1, 2013 for her apartment at 2200 Tiebout Ave. That license allowed her to take care of up to six kids during the day, and two additional ones before and after school hours. It is unknown how many children she actually supervised, if any.

She had no complaint or violations filed against her. The license expired on April 30. She did not apply for renewal and her program was closed.