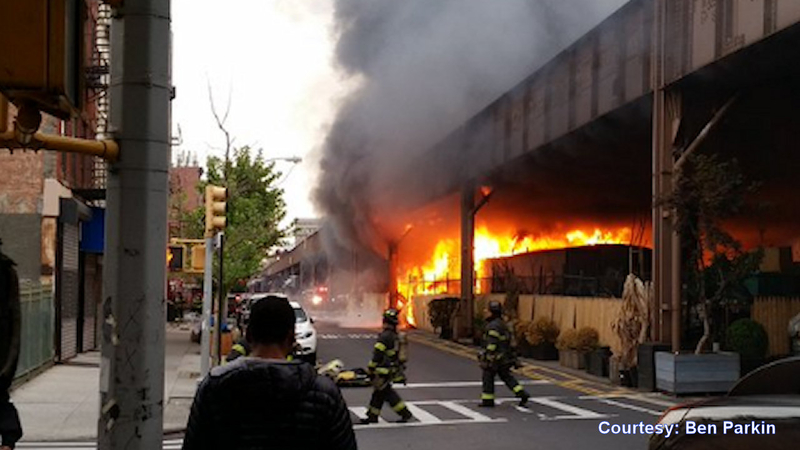 EAST HARLEM, Manhattan (WABC) -- Fire marshals have determined that the fire under elevated Metro-North tracks in East Harlem Tuesday night was accidental, caused by fuel spilled on a hot generator during re-fueling.

The fire at a garden center halted train service for hours and continued to affect service for the Wednesday commute.

Metro-North will operate on an Enhanced Saturday schedule until Friday morning on all three lines.

Trains continue to run with delays in and out of Grand Central.

"We are confident there will be normal service by first thing Friday morning," said MTA CEO Tom Prendergast. "We are working very hard to improve on that time."

Train service into and out of Grand Central was suspended on Tuesday night after a large tractor-trailer caught fire under the tracks at East 119 Street and Park Avenue.

During the Wednesday morning commute, Metro-North trains traveled through the fire area and took passengers directly to Grand Central Terminal. They ran on the two outside tracks of the viaduct where the fire took place.

Train speeds are reduced from 60 mph to a maximum allowable speed of 30 mph. Trains are operating as far as stations in the Bronx, where customers traveling to Manhattan can transfer to the subway to continue their trips.

Nearly 100 Metro-North personnel worked through the night to inspect the viaduct to determine the extent of the structural damage and make temporary repairs.

Workers brought out heavy machinery to replace damaged beams that support the train overpass, beams compromised by the intense heat of the fire.

"There are the beams that have been cut to be able to do the temporary repair so that we can take the load off that column, transfer it to another section, open up the two center tracks of the structure and restore normal service," said Prendergast. "It took a while to put out, it was a very intense fire. You can see the damage that was sustained by the structure. The center column is deformed."

The heat damaged parts of the original column, which dates back to the viaduct's initial construction in the 19th century.

At least 10 cars also caught fire when the two-alarm blaze broke out shortly before 7 p.m. Tuesday. There were some explosions in the fire that were so hot and strong, they blew bolts out of steel.

Buildings on both sides of the street were evacuated.