WLS
By Laura Podesta
CHICAGO -- NTSB investigators have arrived in Chicago to investigate a fire on an American Airlines Boeing 767 at O'Hare Airport Friday afternoon.

Federal officials said the cause of the fire on the plane bound for Miami was "uncontained" engine failure, meaning pieces were blown out of the engine as the plane was taking off. What caused that to happen is still under investigation.

As of Saturday morning, the American Airlines plane was still sitting on the tarmac.

Video from witnesses Friday showed the flames and plume of black smoke coming from the right side of the plane at around 2:30 p.m. All 170 passengers, including flight crew, and a dog were evacuated and 20 people sustained minor injuries, Chicago Fire Department officials said.

"I heard an explosion, or what I thought was an explosion. We looked at each other and I was looking to my right and on the other side I could see fire," Peter said.

"It was sudden it was loud it was it was obviously something was wrong, and then immediately there was fire. I'm not sure what the media is saying, what America is saying, I heard an explosion. And I don't know if that was the engine but it couldn't have been a tire," said Peter McLoyd.

Peter and his wife, Kathleen, were headed to Miami for a cruise. They both were injured as they evacuated the plane. Even with their injuries they're thankful they and everyone else on board survived.

"I was thinking, are we gonna get far enough away before it explodes," Kathleen said.

Of the 20 people treated, eight have been released, officials said.

Gary Schiavone was seated in the rear of the plane as it sped down the runway.

"The motors were spinning like they always do, and it didn't take off yet. It just almost felt like it was going to, and then boom. A big red ball of flame," Schiavone said.

According to Schiavone, the heat from the fire cracked windows on that side of the plane.

"The smoke was the worst thing. About halfway through getting out, the smoke started to get a little bit heavy. You get a deep breath to get some oxygen, and you took in smoke, and that was the scariest part of the whole thing," he said.

He said the evacuation was orderly, and that children and seniors got help from fellow passengers.

"And then when we got out of the plane, everything was on fire, and the smoke. You've seen the videos. We were just like in awe when we got out," he said.

Gary, a passenger on American Airlines flight 383, recounts his experience on the plane.

Passenger Hector Cardenas said the plane was seconds away from taking off when he heard an explosion. Large flames and a plume of black smoke could be seen rising from the aircraft.

Hector Cardenas, a passenger on the plane that caught fire at O'Hare, talks about his experience and shares video from inside the plane.

"Within 10 or 15 seconds we would have been in the air," Cardenas said.

Sarah Ahmed was also on the flight and described the chaos in the moments after the fire broke out.

"We were almost up in the air. We were full throttle, full speed ahead and then we heard this huge bang and there's fire at the window, and so everyone on the right side of the plane got up, jumped up and they'er now on the left side of the plane. So there's a stampede at the left side. The plane comes to a screeching stop. People are yelling 'open the door, open the door!' everyone's screaming and jumping on top of each other to open the door. Within that time, I think it was seven seconds, there was now smoke in the plane and the fire is right up against the windows and it's melting the windows," Ahmed said.

Sarah Ahmed, a passenger on AA Flight 383, describes her experience after the plane caught fire seconds before takeoff Friday.

Conversation between the cockpit and air traffic control revealed how quickly the situation unfolded.
Pilot: "American 383 heavy stopping on the runway."

Video from Tarmac at O'Hare in Chicago. Black smoke and bright flames. pic.twitter.com/sCgiHvdaQu

In a statement, the airline said, "American Airlines is fully cooperating with the National Transportation Safety Board in its investigation of flight 383. We are operating a special flight tonight to take our customers to Miami. Twenty passengers and one flight attendant reported non-critical injuries. Several were transported to Chicago-area hospitals to be evaluated. Members of American's specially trained employee volunteer CARE Team have been mobilized and dispatched to those hospitals, and Chicago O'Hare International Airport to provide assistance for our customers, crew members and their families."

We’re taking care of our passengers and crew on flight 383 at @fly2ohare. For updates: https://t.co/LS0P7po3ap

The National Transportation Safety Board have taken over the investigation. The plane will remain on the runway until the NTSB is finished with their on-site investigation.

Chicago Deputy Fire Commissioner Timothy Sampey said in his estimation it's been about eight years since an incident equivalent to this occurred at O'Hare.
Related topics:
o'hareairplane
Copyright © 2020 WLS-TV. All Rights Reserved.
RELATED 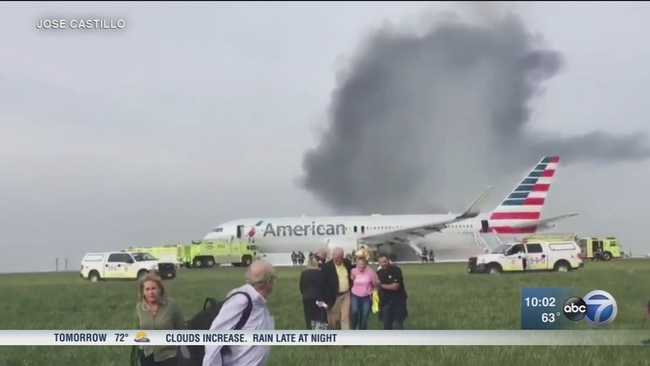