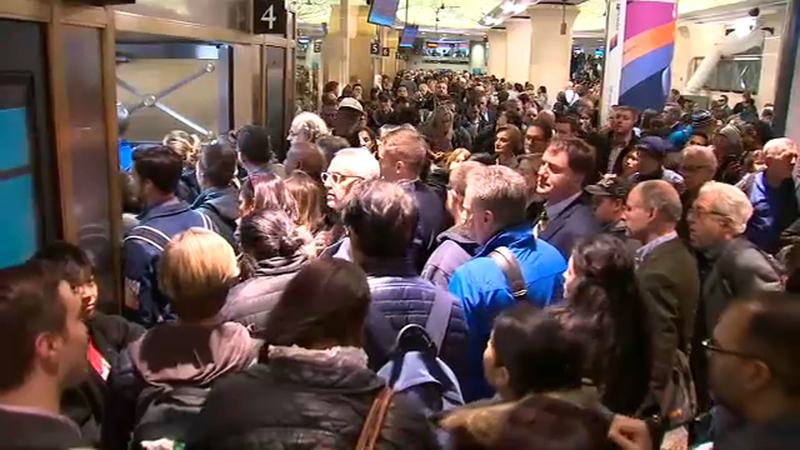 NEW YORK (WABC) -- Things were back to normal but no less frustrating for New Jersey Transit commuters Wednesday morning, after they faced a long ride home Tuesday when an Amtrak Portal Bridge would not lock into place.

Train service in and out of Penn Station New York was subject to 90-minute delays during the evening commute, due to the difficulties with the Portal Bridge.

Officials tell Eyewitness News the bridge was unable to lock in place, and it was the second time that the problem occurred that day. The Portal Bridge initially opened at approximately 9:50 a.m. for marine traffic and then was unable to lock in place, causing delays to three Amtrak trains and several commuter trains. Crews eventually got the bridge locked into place, resuming train operations at around 10:19 a.m.

The bridge was opened again at around 3:24 p.m. for marine traffic, and it was again unable to lock into place. Crews finally got it closed shortly after 4:30 p.m., but the damage was done for eight Amtrak trains and several NJ Transit commuter trains.

Some trains could be seen sitting idle on the tracks near the bridge, and some commuters took to Twitter to complain that they had been stuck there for more than an hour.

It’s been over 60mins on this train! @GovMurphy something needs to be done about this ancient third world system! Totally unacceptable!

Up ahead on a train that left NYP at 3:15 and been sitting for 70 minutes. Something more is def up!

Others stuck at Penn Station in Manhattan posted photos of overcrowded conditions.

If we need another reason to build a new portal bridge. @NJTRANSIT and @Amtrak can’t get out of NYP when the portal bridge is stuck open. @GovMurphy get the funding now for this. #njtransit #portalbridge pic.twitter.com/NRM9wZzoug

The Portal Bridge, near Secaucus, serves 200,000 commuters every day. Built in 1910, it swings open when boats pass by. Amtrak says is had issues closing the bridge 15 percent of the time last year.

"Commuters are getting beaten up left and right because the Portal Bridge gets stuck and you see the chaos it brings," said Carlo Scissura, president of New York Building Congress, a group of developers and builders angling for the so-called Gateway Project.

It is the controversial plan to build a new train tunnel under the Hudson River and widen part of the Northeast Corrider from two tracks to four.

The Portal Bridge has just two tracks. and even when it's working, it lacks capacity. President Donald Trump has thus far refused to support the project, and at $30 billion, New York and New Jersey alone can't fund it themselves.

"All sides must come together from president to Congress to DOT and say we must start funding the Gateway program and we have to get this done," Scissura said.

The latest problems came a day after a packed train broke down and stranded passengers for more than two hours.