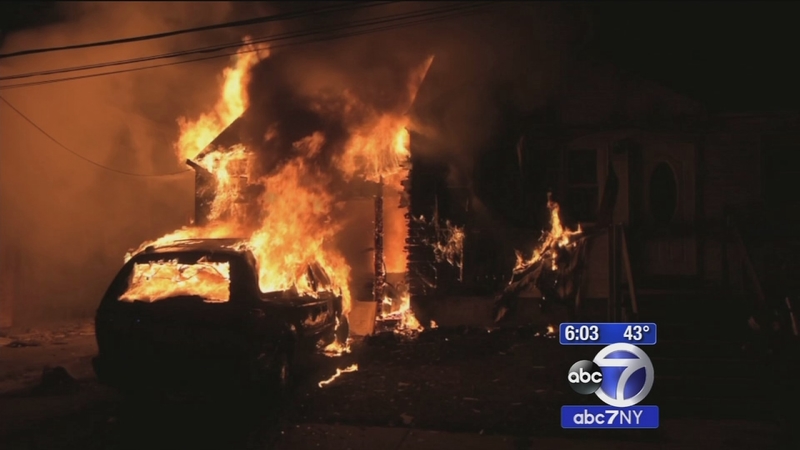 NORTH BABYLON, Long Island (WABC) -- A heroic neighbor put his life on the line to help save a man from a raging fire that destroyed two homes in Suffolk County over the weekend.

The fire broke out early Sunday on Sunrise Highway in North Babylon, beginning in one house and quickly spread to another next door.

Chris Cocuzza said he woke up in the middle of the night and saw flames coming out of the home of his neighbor, Dominick Gennaro, who has cerebral palsy and a seizure disorder. The father of two, a Navy veteran and former volunteer firefighter, ran over to the house and first tried to use the garden hose. But he quickly realized that wasn't going to be enough.

"You could see the flames coming out," he said. "I said get me a ladder, I think he's in his bedroom right now. I start pounding on the window. 'Dominick, get up, get up your house is on fire.'"

Twenty-year-old Joseph Sirota was driving on his way home from work and also saw the flames, so he stopped to see if he could help. He ended up carrying Gennaro to an ambulance that had just arrived.

"I pulled him and I put him on my shoulders," he said.

The rescued victim was thankful.

"Being under the medication, I didn't hear the smoke alarms in the hallway;" he said. "I'm so grateful to him for my life really."

Cocuzza and Sirota said that you never know how you're going to react in a situation like this, but that they didn't think twice.

"I guess when the moment comes, you'll either know who you are or who you're not," Cocuzza said.

"I'm just happy we saved a life," Sirota said. "That's all that matters. I was in the right place, right time."

A minivan parked in the driveway also went up in flames.

It took about 40 minutes for firefighters to control the blaze, and the cause of the fire is under investigation.