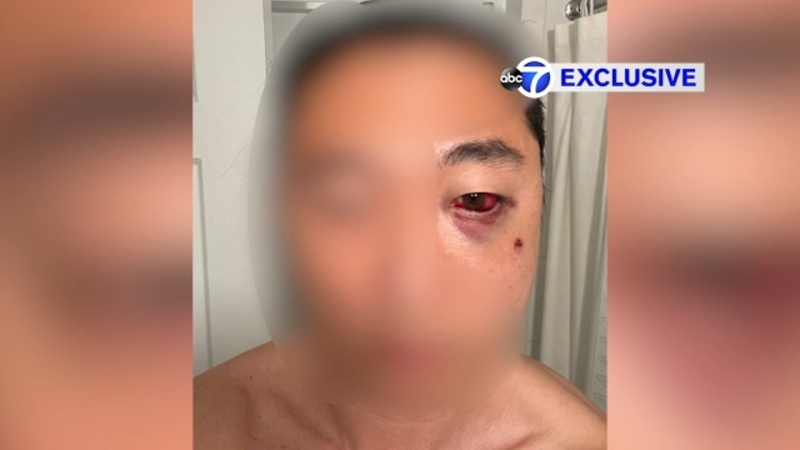 Man with wife and son attacked in Central Park

CENTRAL PARK, New York (WABC) -- A man was with his wife and 5-year-old son when he was attacked in Central Park in broad daylight last weekend.

The victim, who did not want to be identified, spoke exclusively with Eyewitness News.

The incident unfolded last Saturday afternoon near the lake by Hernshead Rocks on the Upper West Side.

It was a gorgeous sunny day, but one man seemed out of place.

"You can tell that something just wasn't right. He was sorta pacing back and forth through this area and he was just kind of muttering to himself," the victim said. "He started coming closer to my wife and my 5-year-old son, and I could tell he was whispering something into her ear."

The 38-year-old victim said it was sexual in nature and it made his wife extremely uncomfortable.

He came within inches of them and the family moved away three times, but each time the man followed them.

And then he cornered them between the lake and the rocks.

"Now he's really in my face and I asked him really politely 'hey let's practice social distance, you don't have a mask on, it's a pretty big park, let's practice social distance.' And then he muttered something to me and said well 'You got a mask. That's an advantage.' And then he mentioned 'You guys always have the advantage.'"

That's when the man sucker-punched the victim and took off, leaving his cheek fractured in two places.

"I was seeing stars for a bit, but my first concern was for my family, I want to make sure they get to safety," the victim said. "I thought it was sweat, but at that point there was just blood running down my face, like profusely. And I felt my face temporarily and it just felt like it was completely dislodged."

With crimes against Asian Americans on the rise, the victim said he's still not sure if that was the case in this instance.

"It's hard to tell if this was motivated by race, however we believe that we were targeted, and whether it's through the fetishes of Asian women in general and sort of the stereotypes they carry, we believe that it's worth it for us to speak up."

There's no evidence the attack was a hate crime, but cops are looking at every possibility.

A bystander took a picture of the suspect and provided it to investigators. The victim is hoping police will release that photo.

In the meantime, he says he's not angry.