NYC food vendors protest, say lack of permits making it hard for them to work 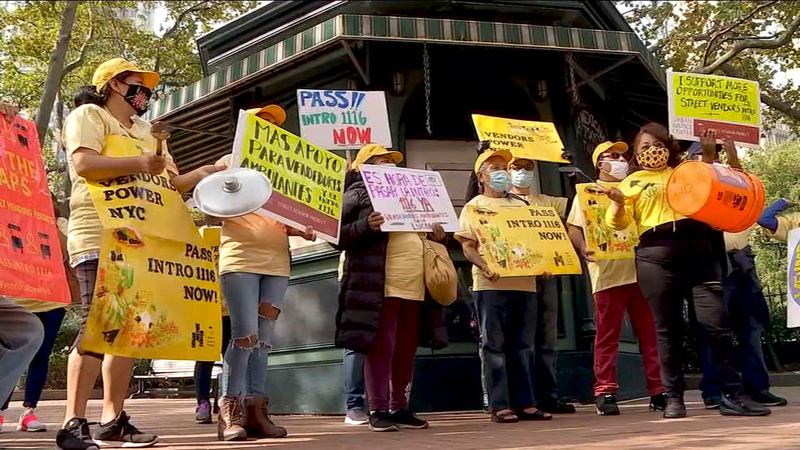 NEW YORK CITY (WABC) -- A group of New York City food vendors set aside their carts Thursday in protest, asking the City to make it easier for them to work.

Fabiatos is a second-generation street vendor and has a license to sell, but can't get a permit.

"I'm just selling plain water on the street right now because I have no permit so I've received three tickets," Fabiatos said.

The permits are hard to come by, New York City gives out about 5,100 a year.

A number that's stayed roughly the same for nearly 40 years.

"Not a lot of people understand that vendors don't have permits, not because they don't want to, but because they can't," State Senator Jessica Ramos said.

With so few permits available some vendors just sell illegally while others partner with a permit holder and share profits and still others turn to the black market.

"Many of them save up thousands of dollars to rent a permit that's illegal but they got to make a living," City Councilwoman Margaret Chin said.

Chin's bill before the city council would increase the number of permits given out and would create a new enforcement agency so that this kind of activity isn't criminalized particularly at a time when so many people are finding it hard to make ends meet.

"We have to make sure everybody comes out of this pandemic stronger, not just some," Public Advocate Jumaane Williams said.