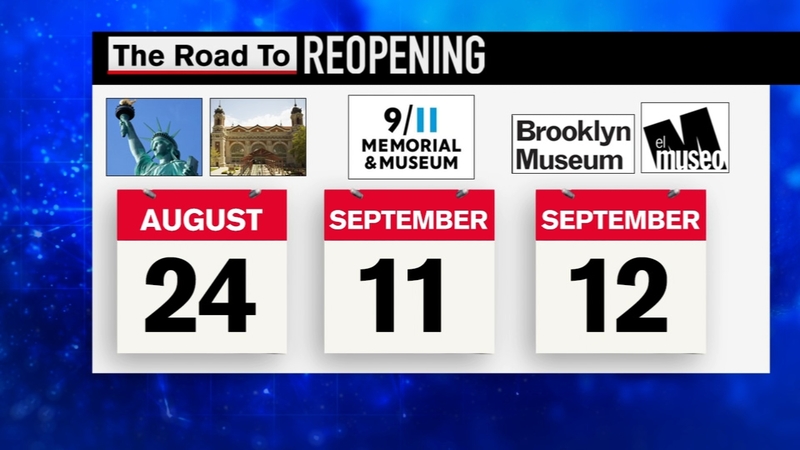 The Intrepid Sea, Air & Space Museum reopens to the public on Friday, Sept. 25. There will be enhanced cleaning procedures, masks must be warn and attendance is initially limited to a maximum of 25 percent of museum capacity to manage physical distancing.

The American Museum of Natural History opened to members on September 2 and will open to the public on September 9.

Updated hours for the museum are Wednesday to Sunday, 10 a.m. to 5:30 p.m. The museum has made changes to operating days, ticketing and health and safety measures, including a timed-entry ticket reservation requirement.

The New-York Historical Society reopens September 11, 2020, with a full slate of exhibitions throughout the building and safety protocols in place for visitors and staff. The three-day opening weekend celebrates New York's resilience with a special digital installation titled World Trade Center Four Decades: Photographs by Camilo José Vergara, a free virtual public program about 9/11, and joining institutions across the city by lighting up its faade as part of "Tribute in Lights." The Museum has extended a number of special exhibitions, including Bill Graham and the Rock & Roll Revolution; Women March; Colonists, Citizens, Constitutions: Creating the American Republic; and The People Count: The Census in the Making of America.

The NYC Fire Museum has decided to reopen on September 9.

The staff has been working for several weeks already to prepare for reopening. The museum will only be open from Wednesday through Sunday 10 a.m. to 5 p.m.

Tickets must be pre-purchased and sales will be in 1-hour time blocks. Visitors will be advised to limit their time in the museum to 45 minutes.

Among other precautions, the museum will operate at 25% capacity as required by law.

The American Folk Art Museum reopen to visitors on Friday, August 28, with Member preview days on August 26 and August 27.

"Since the day we closed in March, we have been eagerly working toward today's announcement and our reopening. The safety of our staff and visitors remains our first priority and we are prepared to offer a great experience for all ages," said Jason T. Busch, Director of the Museum. "Our community is invited to find respite and inspiration in artworks on view that speak to themes of resilience, opportunity, resistance, and change."

The Museum's Lincoln Square location will be open five days a week, Wednesday through Sunday from 11:30 a.m. to 6 p.m.. All visitors will be required to have a ticket prior to entering the Museum's galleries and are asked to reserve in advance. Admission is always free.

The Brooklyn Museum announced it is reopening September 12. As part of a safe reopening, all tickets are timed, with entry every 15 minutes. To limit the number of people in the galleries, only the 1st and 5th floors will be open.

In addition to setting forth Visitor Guidelines, El Museo has also implemented staff health checks; established a more frequent cleaning routine that includes a building-wide cleaning schedule; incorporated enhanced cleaning of high-touch surfaces throughout the day; and installed hand-sanitizer stations throughout the Museum.

Madame Tussauds New York officially reopens to guests on August 26. The attraction will be open from 11 a.m. - 5:00 p.m., Wednesday through Sunday.

Face coverings must be worn by all guests and capacity will be restricted to no more than 25 percent of permitted occupancy. Madame Tussauds New York has taken NYC & Company's Stay Well New York Pledge which is backed by public health protocols, to help businesses reopen responsibly.

Nearly six months after the coronavirus forced its closure, the 9/11 Memorial Museum will be reopening on the anniversary of the terrorist attacks next month, first to those who lost loved ones and then to the general public, museum officials announced. The memorial plaza had been open to the public with social distancing restrictions since early July, but the museum remained closed as did other cultural institutions.

The anniversary day reopening will be reserved for families of those killed in the 2001 attack and the 1993 World Trade Center attack. The public will be able to visit starting Sept. 12.

Pandemic restrictions will be in effect, such as a limit of 25% of capacity, and a requirement to wear masks. The museum had always mandated visitors to get timed entry tickets in advance, which will continue now. The museum said other measures had been implemented, such as Plexiglas dividers and hand-sanitizing stations, as well as temperature screenings for all, and a one-direction path through the facility. Hours at the museum are being restricted to five days a week, from the seven days it had been opened before its shutdown in mid-March.

The museum will now be closed on Tuesday and Wednesday. Some exhibition spaces will remain closed to the public, and some services like coat check will not be available.

Museums on Liberty and Ellis Islands

The partial reopening of the museums is part of the NPS Phase One reopening of Statue of Liberty National Monument and Ellis Island, will include access to:

The interior of the Statue of Liberty, including the pedestal and crown, remains closed and will be included as part of a later reopening phase. Outdoor spaces on Liberty and Ellis Islands will be accessible to the public in accordance with the latest federal, state and local public health guidance.

Museum of Arts and Design

The Museum of Arts and Design announced it will reopen its doors on September 17.

"Thank you all for your support during this time. We are looking forward to welcoming back old friends, as well as our newest supporters who will be visiting The Museum in person for the very first time. Stay tuned for further details on safety protocols, hours, and upcoming exhibitions. We'll see you soon!" the museum wrote in a message to its Instagram followers.

The New York Aquarium is reopening to the public on on August 27. Members can visit the aquarium as soon as August 24.

The aquarium says the latest exhibit, Spineless, featuring octopus and jellyfish is ready to be explored.

Healthcare heroes can enjoy a day at the aquarium for free. If you previously bought a ticket to the aquarium, you can pick a new visit date and the aquarium will email you updated tickets.

The Museum of Modern Art
The Museum of Modern Art will reopen to the public on August 27, 2020, with new hours for the first month, through September 27: from 10:30 a.m. until 5:30 p.m. Tuesday through Sunday to the public; and from 10:30 a.m. until 5:30 p.m. on Mondays for MoMA members only. Admission will be free to all visitors Tuesday through Sunday, through September 27, made possible by MoMA's long-standing partner, UNIQLO. MoMA is dedicated to providing a safe environment for all with new safety protocols that follow CDC, New York State, and New York City guidelines. The Museum's Flagship Store on 53rd Street and the MoMA Design Stores in Midtown and Soho are also open.

The Metropolitan Museum of Art

The Metropolitan Museum of Art will reopen to visitors on August 29.

The Met will offer preview days for members on August 27 and 28. The Met Cloisters is scheduled to reopen on Saturday, September 12.

"After nearly six months, The Met's reopening will be a historic moment for the Museum and the City," said Daniel H. Weiss, President and CEO of The Met. "Throughout the recent months of uncertainty, isolation and grief, we have longed for the day when we can safely welcome everyone back to The Met, where all can find comfort, inspiration, and a sense of community. To see visitors walk through the doors of the Museum once again will be a very powerful experience."

The Met's Fifth Avenue building will be open five days a week, Thursday through Monday. On Saturdays, Sundays, and Mondays, it will be open from 10 a.m. to 5 p.m. The Museum will offer later hours on Thursdays and Fridays and be open from noon to 7 p.m.

The Met says they have developed comprehensive safety procedures for its staff and visitors, following guidelines issued by the Centers for Disease Control and Prevention (CDC), New York State and New York City. Measures include limiting the number of visitors to 25 percent of the Museum's maximum capacity and requiring timed entrance registration.