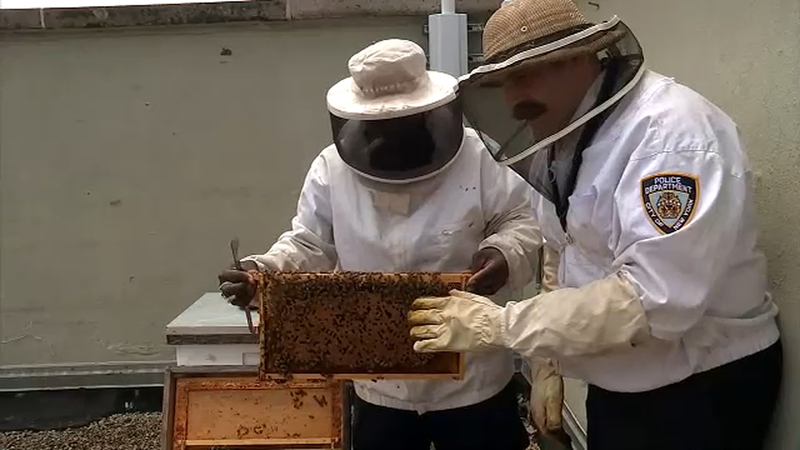 NEW YORK (WABC) -- They have both been with the NYPD for nearly 20 years, but two officers also carry another title: official beekeepers.

Their work is seasonal and they're always on call to remove swarms around the city, when everyone else runs.

Recently they delved into a rooftop hive at the 104th Precinct, attempting to find the queen somewhere in a group of roughly 20,000 honey bees.

"I always say they're cute and fuzzy, they actually look pretty neat. Of course they do sting," said Lauriano.

Hence the less than fashionable but functional protective gear they wear.

When a swarm randomly drops anchor anywhere in the city, the officers come and gently remove the insects.

They take some home. Others are fostered in Ridgewood, Queens.

Darren and Michael make sure the hive is healthy but they only check about once a week.

More would be disruptive - imagine someone pulling the roof off your home, while you're in bed.

As for all of that honey they harvest: "I share it with everyone in the precinct," said Darren. "They buy the jars and I provide the honey for them."

Darren and Michael say you will definitely see more swarms popping up in our area. It actually has to do with what we're doing.

"We're having a lot of rooftop bee hives," said Lauriano. "Since that's happening, there has to be a respect for their natural swarm."

On the hive at the 104th, they isolated the queen bee and called her Beyonce.

And with that, we let them 'bee', with not one sting among us.