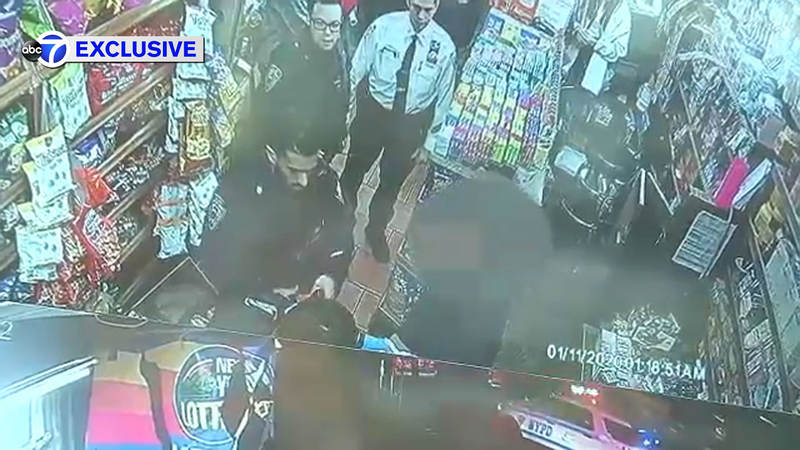 NYPD, bodega worker save teen from machete attack in NYC

EAST HARLEM, Manhattan (WABC) -- Exclusive surveillance video obtained by Eyewitness News shows NYPD officers and a bodega worker come to the aid of a man who was chased and attacked in East Harlem.

The incident was reported Saturday just after 1 a.m. in the 1900 block of 3rd Avenue.

Video released Wednesday shows the 19-year-old victim run for his life as he was chased by two men while one held what appears to be a machete.

When the victim stumbled, his attackers pounced and struck him three times before he escaped into a bodega. A store worker locked the door and helped the victim by blocking the suspects from getting into the store.

Exclusive video of #Harlem #machete attack, and speedy work by cops of @NYPD23Pct to save the victim from bleeding out. At 11 #abc7ny pic.twitter.com/c1Uy1EzkTE

When officers from the 23rd Precinct arrived, one was already wearing gloves and immediately tended to the victim who was gushing blood from both arms.

The cops took our tourniquets and applied them to each arm, then walked him out of the store and drove him to the hospital.

When a teen was assaulted with a cane sword, @NYPD23Pct Officers Brady & Ortiz jumped into action, applied tourniquets & rushed him to the ER.
Using video from the scene, POs Bischoff & Medina soon spotted & arrested the suspect.
Outstanding work — from lifesaving aid to arrest. pic.twitter.com/OHC5pXadgf

The suspect with the sharp object was later arrested and charged. He was identified as 19-year-old Abner Suazo and faces charges of assault, criminal possession of a weapon and menacing.

Suazo was arrested twice in 2019 -- once for assault in July and once for criminal possession of a weapon in November.

The victim is expected to make a full recovery.