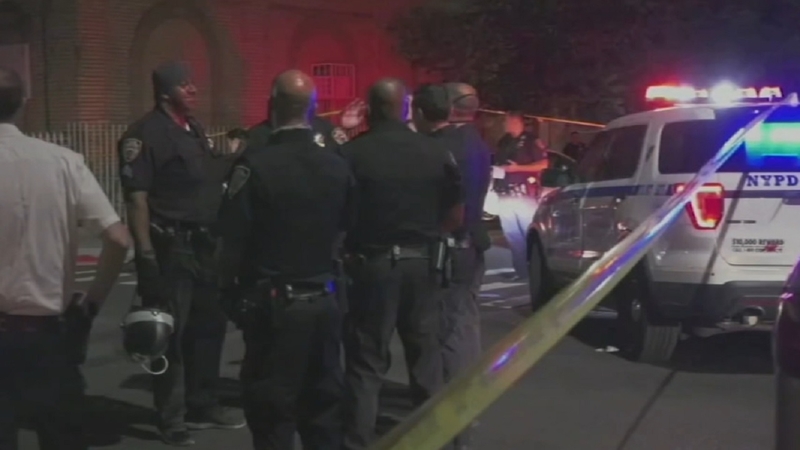 NEW YORK (WABC) -- A disturbing video circulating on social media shows a crowd taunting and then a man attacking a police officer in the Bronx as they arrested another man. That officer received injuries, requiring him to get stitches.

In the video, tweeted by the Sergeants Benevolent Association, the suspect repeatedly refused the officer's request to move his car from a fire hydrant on Morris Avenue.

As the group grew larger, so did their taunts. One of the officers asked a man to back off, and when a scuffle ensued, the officer is placed into a chokehold.

Former Chief of Detectives Robert Boyce says he is troubled by the video and says similar incidents like this are far too many, saying police officers' hands are tied as crime in the city spikes.

"These are tough times, and we need leadership here - political leadership," said Boyce.

A "heinous and unprovoked" double stabbing onboard a subway in Queens was caught on camera.

City officials have defunded the police budget by a billion dollars, passed police reform laws, and allowed for bail reform, sending thousands of convicts on the streets.

The Bronx DA is now investigating the incident, and the Sergeant Benevolent Association is lashing out at city officials, along with the video tweeting out the message, 'Corey Johnson, your stupid law is about to be signed by NYC stupid Mayor. It's time you both take your community input and grab these perps yourself."

On Sunday night there was a faceoff between blue and Black Lives Matter as hundreds gathered in Bay Ridge with tensions high.

Then, Mayor Bill de Blasio is working to get local community activists involved to reduce crime, but how does it work?

"I encourage that, but it's not a crime plan, it's a crime hope - what you need is tough intelligence policing up in there with the DA who is backing it up," he said.

We have a lot to do to heal the relationship between police and the community. That starts with standing together and advancing reforms, but it also means we cannot accept violence against our police officers. https://t.co/Q3h4xwBQOA