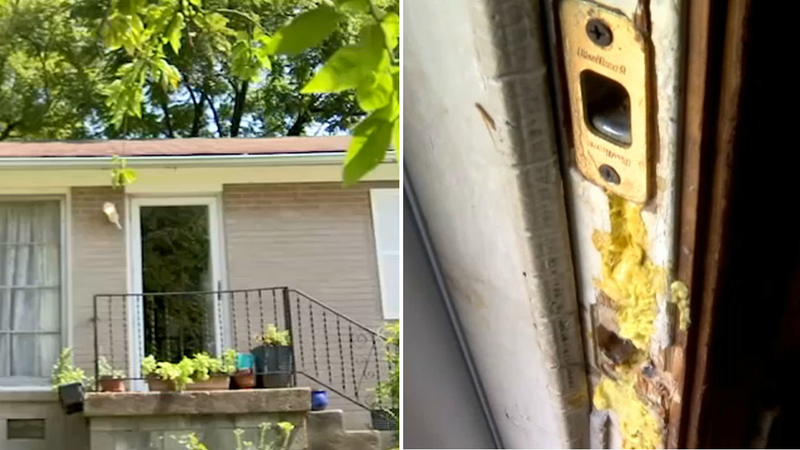 NEW YORK (WABC) -- Eyewitness News has confirmed NYPD Officer Michael Reynolds, of Manhattan North, is under investigation in connection with a home break-in in Nashville, Tennessee.

Home surveillance video captured a man, Nashville Police confirmed they believe is an NYPD officer, walking down the street around 2:30 a.m. on July 9, in a popular Nashville neighborhood with two notorious short-term rental properties.

Conese Halliburton, who lives down the street from those homes, says minutes later she was awoken by that same man, seen on surveillance video, breaking into her home and threatening her sons.

A Nashville police report described the suspect as a white male, with buzzed blond hair and blue eyes.

Witness statements logged in the report further described the suspect as "heavily intoxicated and disoriented."

The next day, Halliburton said she confronted several men, including the one who broke into her home, staying at one of the short-term rentals. That exchange was also captured by surveillance video.

Then this week, about a month after the break-in, a Nashville police spokesperson confirmed that an NYPD officer had flown to Tennessee at the request for the department for questioning in connection with the break-in.

According to the NYPD, Reynolds' duty status has not changed while NYPD awaits the results of Nashville's Investigation.

A spokesperson for the department said the department is working closely with Nashville police on the matter and has launched an internal investigation of its own.

Charges have yet to be filed but a Nashville police spokesperson said the officer could face misdemeanor charges for aggravated trespassing.

Halliburton said her family is struggling to get over the terrifying moments last month.

"I'm working on no sleep. I have nightmares. My kids are having nightmares," Halliburton said.