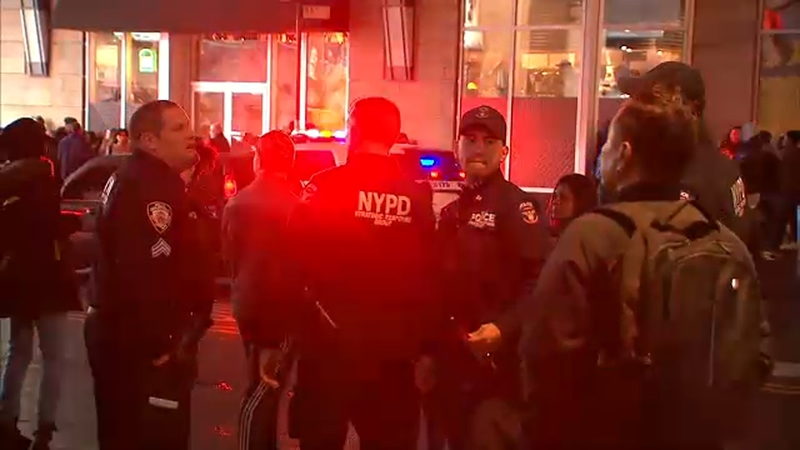 NYPD responds to NYC mall after fight among 200 kids

ELMHURST, Queens (WABC) -- Police responded to the Queens Center mall on Friday after a fight between hundreds of kids.

Schools in the area had a half day of classes, and Eyewitness News has learned of rumors spread on Snapchat that there was going to be a large fight at the mall.

Approximately 200 kids gathered at the shopping center, but no fight ever happened.

Then, for an unknown reason, someone began throwing fake cash over a railing from an upper level, and a melee ensued as the teens scrambled to grab what they thought was real money.

Authorities were called to the scene around 1 p.m. for crowd control and quickly cleared the area.

The mall was not closed, but police encouraged the public to stay away from the scene while they assessed the situation.

#HappeningNow we have a large disturbance at @Queens_Center Mall. Half-day for our schools has brought a large # of youths to the mall and some are acting disorderly. Officers and Mall staff are acting quickly to restore normal conditions. For now please stay out of the area.

It does appear there were several fights outside the mall once the teens were evacuated, though it's not clear if that was related.

It was not yet clear if there were any injuries, but at least one person was taken into custody.

No one under 18 was allowed to reenter the mall.

A spokesperson from the mall released the following statement:

"We are disappointed by the actions of the teens in our community today and remain committed to providing a safe, enjoyable community destination for everyone."