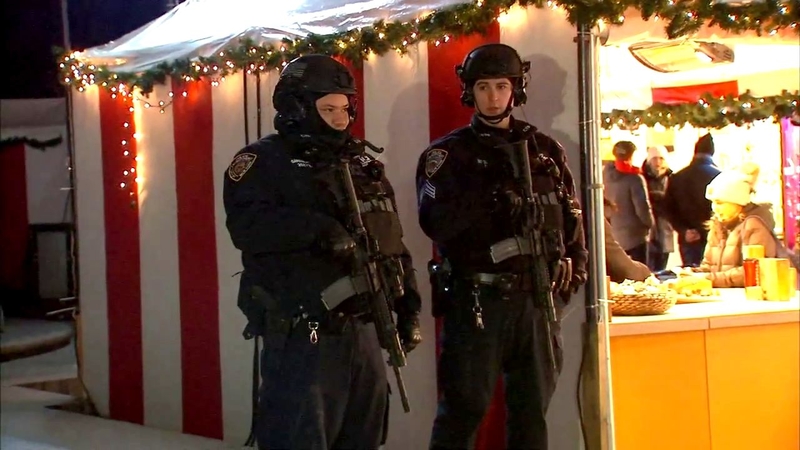 Security stepped up at NYC Christmas markets because of Berlin attack

There's no specific threat in NYC stemming from the incident in Berlin, but as a precaution, the NYPD has moved heavily-armed Critical Response Command officers toward these displays.

Locations for the Christmas markets include Columbus Circle, Union Square and Bryant Park, as well as several others across the city. Mayor Bill de Blasio said it took just 60 minutes for the NYPD and other authorities to respond and react to the terror attack that killed a dozen people and injured nearly 50 others in Germany.

"NYPD is reinforcing the Christmas market locations around the city," de Blasio said. "Critical Response Command and Strategic Response Group are deployed right now. It happened within just an hour or two after the attack."

Part of that response involved the NYPD's renewed outreach to truck rental companies in and around the five boroughs, a pro-active approach initiated long before this recent attack.

"NYPD went back and went to a number of companies in the last 24 hours to check in and to check for anything suspicious," de Blasio said. "Obviously, so far, nothing has been brought up."

Adding to the NYPD's security challenge is the time of year, as many of the record 60 million visitors to the Big Apple are here right now. Protecting New Yorkers is tough enough, but add millions of tourists to the mix, and a tough job gets even tougher.

"Around the holidays, from Thanksgiving to New Year's Eve, we are at a heightened state of alert, on top of our already high state of alert," de Blasio said. "And we move our assets constantly."