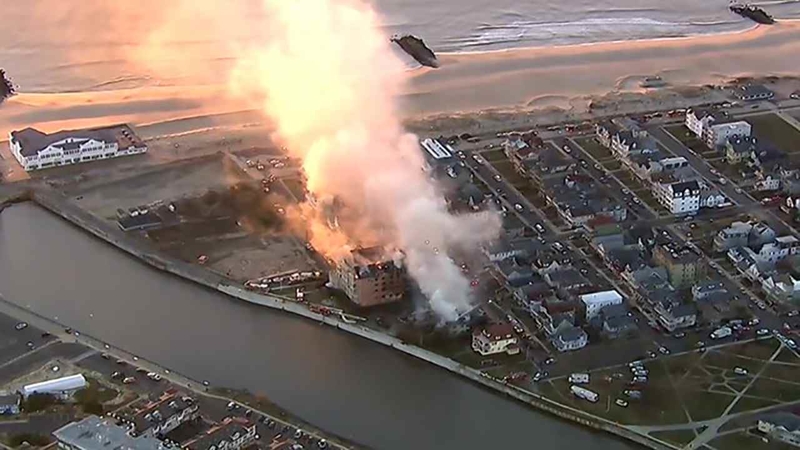 The fire broke out at 5:10 a.m. in the Warrington Rest Home at 22 Lake Avenue. The former hotel was more recently used by the state for housing, but it was vacated by the state and slated for demolition, to be replaced by new housing.

Six other structures were damaged, including four single family homes, the La Pierre condominiums and the Marlborough condominiums.
Neptune Police Captain Michael McGhee said the fire progressed quickly, spreading over a vacant lot that is the site of the Park View Inn on Seaview Avenue, another former hotel dating back to the turn of the century that was recently demolished. From there, it spread to the La Pierre Condominiums at 16 Lake Avenue, where all occupants were safely evacuated.

McGhee says everyone is accounted for, and two firefighters had minor injuries.

"Right now, we believe everyone who should be accounted for is accounted for," he said. "We will do another search after everything is settled down to make sure there was no one in any of these buildings who shouldn't have been."

Four of the structures are complete losses, and the Red Cross is helping displaced residents.

"It could have been much, much worse," McGhee said. "We've had too many fires in Ocean Grove when we've lost the entire block. To have them knock it down, and still have the LaPierre still up and standing, is tremendous."

Ocean Grove was formed as a religious community in 1869. It claims the largest number of Victorian architecture in the nation.