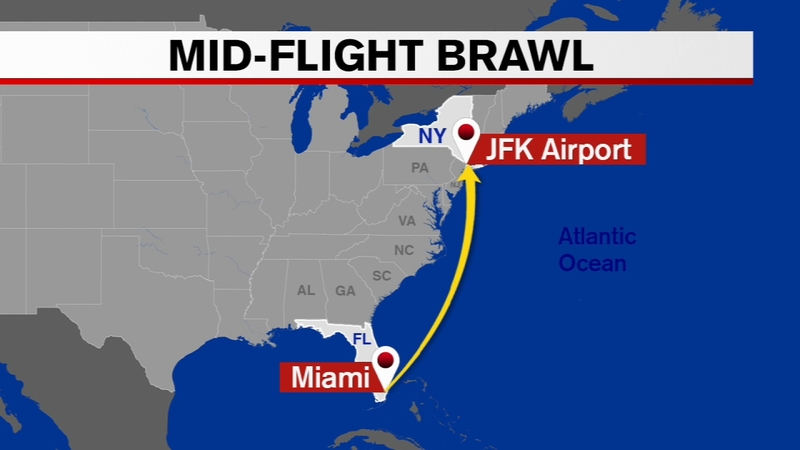 NEW YORK CITY (WABC) -- A passenger was arrested for a mid-flight brawl aboard American Airlines 1357 from Miami to New York Sunday after she allegedly attacked a flight attendant.

Chenasia Campbell, 28, is facing charges after authorities say she assaulted the flight attendant while the plane was in the air, causing bruising and injuries, and at one point bragging that the cops would do nothing.

As it happened, an off duty NYPD police officer was on the flight and restrained Campbell until the plane landed.

According to court records, the incident started when a different flight attendant failed to pick up Campbell's garbage.

Campbell then followed her to the back of the plane and began yelling.

When a colleague tried to separate the two, Campbell accused that flight attendant of pushing her and then punched the woman and pulled her hair.

"The defendant stated to the victim that the 'cops aren't going to do anything to me,' and then struck the victim with closed fists, causing the two of them to fall to the floor," the complaint said. "At some point during the altercation, the defendant attempted to pull up or remove the victim's dress."

The off-duty officer intervened and put Campbell in hand restraints for the remainder of the flight.

She was arrested at JFK upon landing.

The flight attendant, who was not identified in court records, walked off with scrapes to the arm and cheek, bruises to the head and leg and swelling in her hands.

The NYPD released a statement about their officer, saying, "This incident underscores how New York City police officers are never truly off-duty, but are always ready to assist - no matter the time or place - when public safety is threatened or people need help."