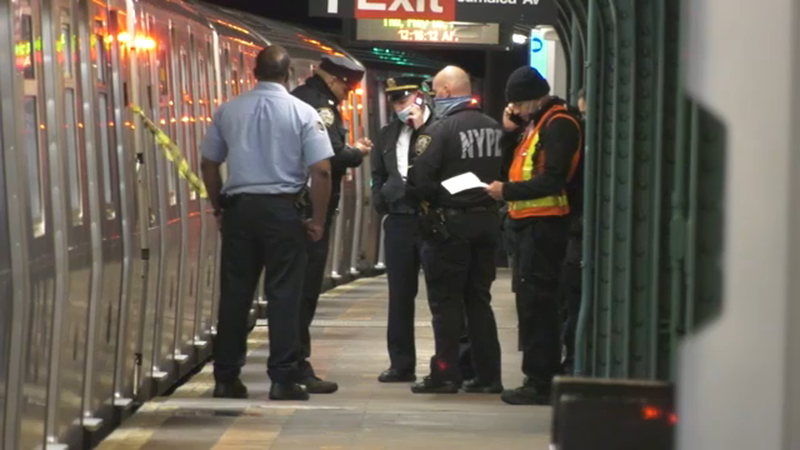 CYPRESS HILLS, Brooklyn (WABC) -- An off-duty MTA employee was slashed while riding the subway through Brooklyn on Wednesday night and remains in critical condition.

The 52-year-old victim, a conductor who was off duty and not in uniform, was on the J train at around 11:20 p.m. near Fulton and Crescent streets.

Sykes was slashed from behind his ear to his left eye.

He was taken to Jamaica Medical Center where he underwent two emergency surgeries.

The father of three was last said to be unconscious and in critical condition.

The suspect ran away from the train at the Crescent Street station. No arrests have been made.

The incident was one in a string of violent encounters on the subway Wednesday.

On Thursday, at least two more incidents were reported: a 2 train operator in the Bronx was punched and knocked unconscious and a rider in a wheelchair somehow ended up below a subway train at the Barclays Avenue station.

The incident in the Bronx happened around 1:30 p.m. between 238th Street and Nereid Avenue. The operator smelled cigarette smoke and opened the cab door to investigate when the suspect kicked the door back and proceeded to strike the 39-year-old in the head.

Sykes' aunt spoke to the Transport Workers' union outside of the hospital on Thursday.

"Our ask is from the city additional police officers riding on the subway platforms, riding on the trains to protect riders, customers and our employees, like Mr. Sykes," MTA Chairman Patrick Foye said.

Crime in the subways, particularly assaults, is up, despite plunging ridership -- from over five million a day to under one million in April of last year.

In February, an additional 600 officers were surged into the system after a series of shoving incidents and a stabbing spree by a homeless man.

When Mayor Bill de Blasio was asked about safety in the subway Thursday, he said the NYPD is doing a great job and overall crime in the subways has gone down.

"The NYPD has made clear that they'll make adjustments whenever needed, the officers that were surged into the subway helped address some real issues and whenever the have to do that again they will," de Blasio said.

The head of NYC Transit says that makes it seem like the extra officers have already been pulled back at a time when the MTA is trying to reassure passengers it's safe to ride again.

"We're talking about the next three to six months, give us a buffer so that we can get ridership back, get us to that tipping point where there's more safety in numbers," Sarah Feinberg said.