Apple Pay can double-charge commuters who use MTA's OMNY 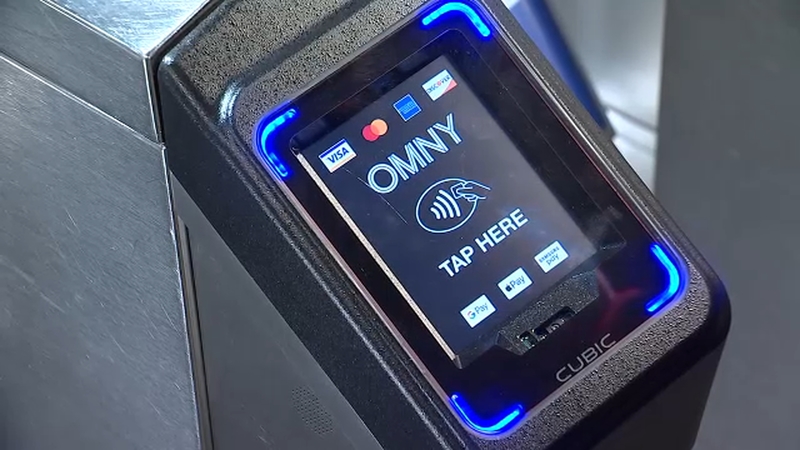 MTA's OMNY system can double-charge commuters who use MetroCard

NEW YORK CITY (WABC) -- The MTA is warning commuters about an Apple Pay feature that could lead to a double charge when you enter the New York City subway system.

The feature, which can be set up using Apple Pay on your iPhone, is called Express Transit.

It allows the MTA to charge you for your fare when you tap your phone on the OMNY turnstile.

The problem is some customers have tapped the turnstile unintentionally -- including phones in pockets where the person is tall enough for their device to align with the reader -- while using a traditional MetroCard, resulting in a double charge.

"We've been notified by about 30 customers out of more than 5 million taps so far about unintended charges," an MTA spokesperson said in a statement.

Heading through the turnstiles at Grand Central recently, Macartney Morris thought he would use his MetroCard instead.

"It was the last two days of my monthly MetroCard," he said. "I swiped it."

By the time he got out of Queens, he looked down at his phone and there was a $2.75 charge from the MTA.

"I knew that I had swiped," Morris said. "My phone was in my pocket. It was put away."

"It's called card-clashing," OMNY Executive Director Al Putre said. "It's not that uncommon, and it's basically a user issue because the user doesn't realize that their phone or another card is actually going to pay the fare while they are trying to use their MetroCard or some other payment."

Putre says OMNY have seen -- out of millions of taps -- 30 double billings, mostly with Apple Pay, and does expect to see more.

"Customers that want to use MetroCard need to disable the express transit mode in their phone to prevent card-clashing," he said.

This pertains to any mobile wallets with the transit option.

"Subsequently, it became an automatic feature in the phones and a lot of customers were not aware of it," Putre said. "Customers need to turn it off if their intent is not to use the mobile device."

Macartney has the express transit pay option in Apple Pay, which he has used to tap and pay in London and Vancouver, but never encountered this issue.

"This was literally right here in my pocket walking through the turnstile and swiping," he said. "Like sure it's close, but am I supposed to hold my phone like 6 feet above my head? Like come on MTA."

Macartney received a credit to a new OMNY account and other customers are being made aware to check their mobile wallet settings.

"It says express transit card," Putre said. "You click on that and it's enabled, so you click none. It will then disable it, and now it says none."

OMNY was first introduced last May and is expanding throughout Manhattan. The MTA says the OMNY system has been a popular success.