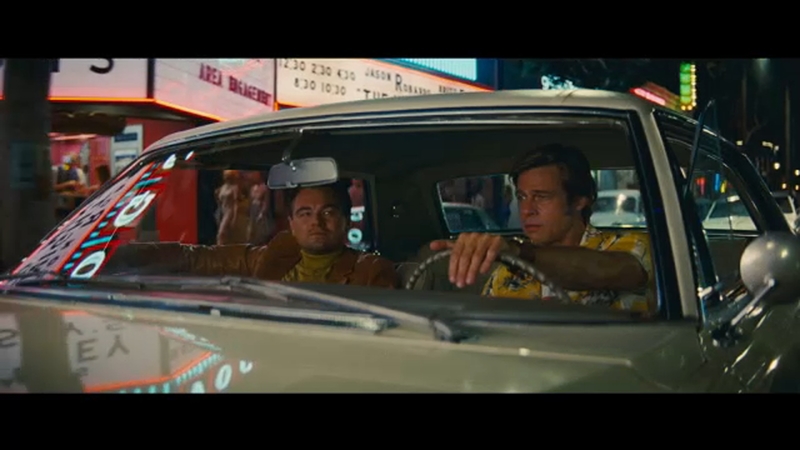 NEW YORK (WABC) -- "Once Upon a Time in Hollywood" is an ambitious failure that is one of the biggest disappointments of the year. Quentin Tarantino's ninth film is one of his worst!

Leonardo DiCaprio plays a fading TV star. Brad Pitt is his stuntman and good pal. Pitt reasserts himself as one of the world's biggest and brightest stars. DiCaprio? Not so much. Both play fictional characters, but the actor, Rick Dalton, lives next to the home shared by two real people: director Roman Polanski and his wife, Sharon Tate.

As Tate, Margo Robbie isn't given enough to say in the movie. This fine actress is reduced to eye candy: totally marginalized at a time when women in Hollywood are trying to erase years of inequity. Even worse, the filmmaker rewrites history and tramples on the memory of Tate, who was after all, a real victim of one of the most brutal crimes of the 20th century - when she was murdered by followers of Charles Manson.

The real star of this movie is the production design! LA's past is lovingly re-created, so lovingly that it becomes, not the means to tell a story, but an end in itself: a beautiful frame to a tall tale that is as insignificant as it is boring.

One critic complained that "Once Upon a Time in Hollywood" is the first Quentin Tarantino movie that actually drags; and at a running time of two hours and 40 minutes, the picture is hopelessly self-indulgent. Call it an epic fail, and take my advice to stay away.
Report a correction or typo
Related topics:
arts & entertainmentleonardo dicapriomovie reviewsandy kenyonquentin tarantino
Copyright © 2022 WABC-TV. All Rights Reserved.
TOP STORIES
Winter Storm Update: Nor'easter hits the NYC area
How much snow in NYC, Tri-State area
NY battered by high winds, blanketed in heavy snow from nor'easter
Winter nor'easter: LIRR suspended, other mass transit info
'This is a big one': Murphy declares NJ state of emergency
Winter hurricane? What is a 'bomb cyclone' or 'bombogenesis'?
Parts of Connecticut could get 2 feet of snow, Gov. Lamont warns
Show More
Share weather photos and videos here
AccuWeather Alert: Heavy snow, wind
'I can't believe I'm alive': Man shoved onto subway tracks speaks out
3 arrested in shooting death of innocent honor student in New Jersey
Widow delivers heart-wrenching eulogy for NYPD Detective Jason Rivera
More TOP STORIES News