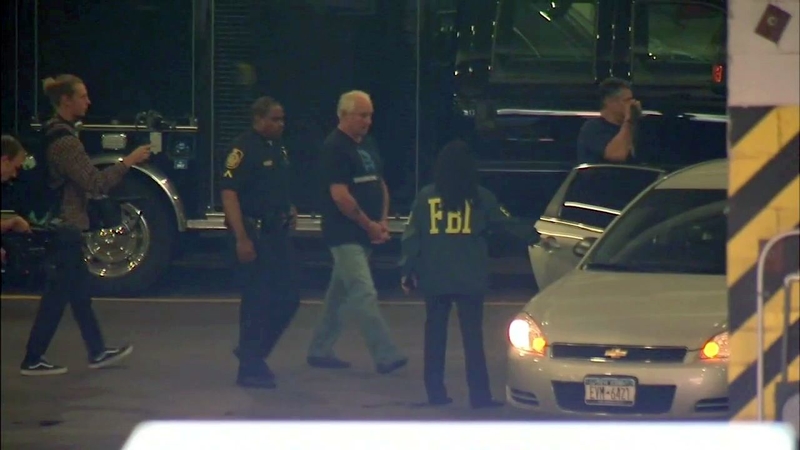 NEW YORK (WABC) -- Nearly four dozen suspects were arrested on Thursday in a massive case charging them with wanting to break knees and commit other crimes that sound like something from a Martin Scorsese movie.

The 41 suspects who were arrested are reputed members of the Bonnano, Genovese and Columbo crime families. During the arrests, agents recovered three handguns, a shotgun, gambling paraphernalia and more than $30,000 in cash.

Several of those arrested are accused of running an illegal casino-like operation in Yonkers that took horse bets, and staged poker and dice tournaments.

The indictment "reads like an old school Mafia novel, where extortion, illegal gambling, arson and threats to 'whack' someone are carried out along with some modern-day crimes," such as credit card skimming, said Diego Rodriguez, head of the FBI's New York office.

Among those charged was Pasquale "Patsy" Parrello, identified as a longtime member of the Genovese organized crime family in New York City.

One count accuses the 72-year-old Parrello of ordering a beatdown in 2011 of a panhandler he believed was harassing female customers outside his restaurant in the Bronx, telling a cohort to "break his ... knees." The panhandler was "located and assaulted with glass jars, sharp objects and steal-tipped boots, causing bodily harm," the court papers say.
Afterward one of his cohorts was recorded saying, "Remember the old days in the neighborhood when we used to play baseball? . . . A ball game like that was done," the papers say.

Prosecutors also detailed how in 2013, Parello ordered retaliation against a man who stabbed a member of his crew outside a Bronx bar. After an associate agreed to "whack" the attacker, Parrello cautioned him to "keep the pipes handy and pipe him, pipe him, over here (gesturing to the knees), not on his head," the papers say.

In Massachusetts, five alleged associates of the New York-based Genovese crime family were arrested on extortion-related charges as part of the sweep.

The arrests follow a multi-year investigation. In all, 46 people were indicted in the case.

Here's a list of everyone charged in the case: