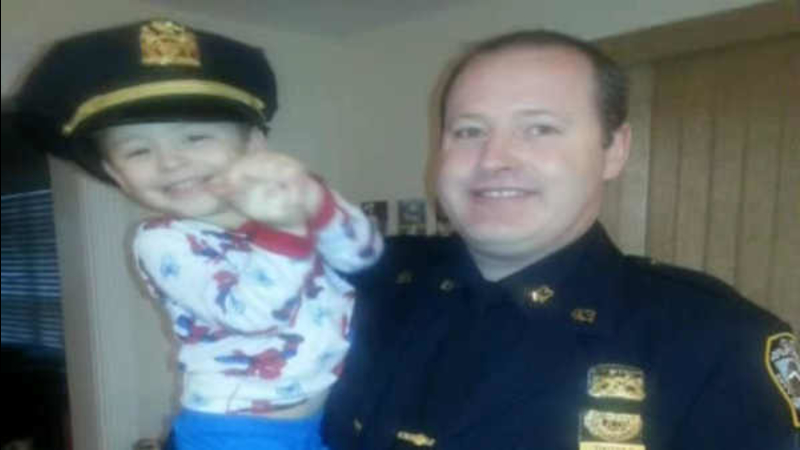 NEW YORK (WABC) -- Lisa Tuozzolo is putting on a brave face for her two young kids, but make no mistake. She's in agony.

"We talk about him every day. We look at pictures," she said. "It's at night, when the boys are in bed and tucked away, I am left alone to my own thoughts and my own memories. And that's when it gets difficult."

Her husband, Sergeant Paul Tuozzolo, was shot in the head and killed as he approached 35-year-old Manuel Rosales in the Bronx last November. Another sergeant, Manny Kwo, was shot in the leg. Rosales was killed in a barrage of police bullets that followed.
EMBED More News Videos

He's physically healed, but in his head runs an endless loop of the moment Lisa's husband saved his life.

"I have no choice, but to go back to that day every second because I think about what could have happened," Kwo said.

Ed Mullins is trying to hold it together for the members of the sergeants union he runs.

"His purpose in life was to save Sergeant Kwo," Mullins said.

But Paul was a friend. At Jacobi Hospital that awful night, he watched as Lisa's life unraveled before him.

"Poor girl is walking through hallways in front of hundreds and hundreds of cops, to get to a room," he said. "I stepped outta the room and left that conversation to the mayor and police commissioner... No one wants to be in that room."

They are three survivors of one of the NYPD's darkest moments. A crisp, clear fall day in the Bronx last November. A call for a man with a gun. And a veteran sergeant, Paul Tuozzolo, at the front.
EMBED More News Videos

He was first to find the suspect, first to spot the weapon. But instead of taking cover, he warned the others.

That's why Manny Kwo escaped with a graze wound to the leg while Tuozzolo was shot point blank in the face.

"If Paul doesn't see a gun and alert me and alert the other officers that were on the scene. Maybe we have two funerals, three funerals, we'll never know," Kwo said.

It's been almost five months now since gunfire stilled the silence on this quiet industrial block. And if you stumbled on the corner of Noble and Bronx River Avenues, you'll be forgiven for thinking nothing ever happened here. After all, time has moved on. But not for Lisa Tuozzolo. And not for Manny Kwo.

"He was spared. I believe he was spared for a reason, and I believe Paul was the guy who was supposed to spare Sgt. Kwo," Mullins said.

"It was beyond anything I thought was possible, that a human could do for another," Kwo said.

Kwo is now a lieutenant. Back on the street for the first time last week.
EMBED More News Videos

Lt. Manny Kwo recounts the night of the shooting.

"I feel so honored and blessed that in his final moments he was able to look out for us, look out for me and the other cops that were on the scene that day. And I'll be forever thankful to her, for him, the boys, I look at them I see him," he said.

"(Paul) was an amazing father. He loved his boys," Lisa Tuozzolo said.

Those boys, Austin and Joseph, are now five and four. Their mom says they've gained 35,000 aunts and uncles.

"I choose to take something horrifically traumatic and tragic and turn it into something meaningful and purposeful," she said in a recent speech.

Lisa has started venturing out to speak about her husband's sacrifice. Her biggest fear is that people forget.

"I kissed Paul every single morning and my words always to him were I love you be safe. And never in a million years did I think on that Friday that that was the last time that I was going to be able to say that to him," she said. "I always remind people that you always have to say I love you to those that you care about every single day because you never know when it's gonna be your last."
Related topics:
new york citynypdpolice shootingnypd sgt tuozzolo killed
Copyright © 2022 WABC-TV. All Rights Reserved.
NYPD SGT TUOZZOLO KILLED
Widow of fallen NYPD sgt. running NYC Marathon in his honor
88 NYPD officers honored at Medal Day ceremony
NYPD graduates K-9s, names them after fallen officers
NYPD sergeant killed in line of duty 1 year ago honored with plaque
TOP STORIES
Woman walking with baby stroller shot to death in Manhattan
Mother, half-brother facing murder charges in 7-year-old girl's death
Man snaps pic of vintage Burger King walled-off inside Delaware mall
AccuWeather: Very warm
Prayer vigil held in support of detained WNBA star Brittney Griner
NY State Legislature to pass new gun control bill
NYC's pandemic exodus ending; Rent prices could get even higher
Show More
R. Kelly sentenced to 30 years on sex trafficking conviction
Police search for man after 3 people found dead inside Queens home
7 On Your Side, congressman team up to save homeowner from foreclosure
Couple allegedly ran sex trafficking ring on OnlyFans: DA
U.S. buys 105 million COVID vaccine doses for fall campaign
More TOP STORIES News