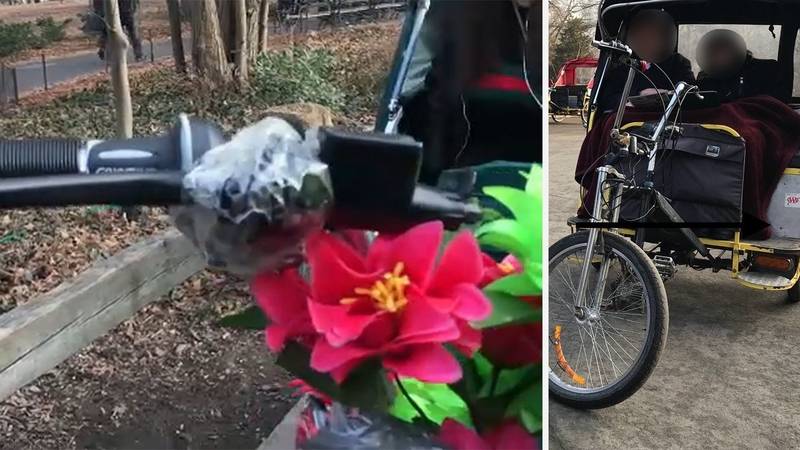 NEW YORK (WABC) -- 7 On Your Side Investigates uncovered pedicab operators in and around Central Park blatantly breaking New York City law prohibiting the use of motors or pedal assists on their rigs.

In 2014, a pedicab burst into flames when one of the illegal motors overheated.

Still, 7 On Your Side Investigates found dozens of riders continue to break the law.

The assistance slows down how quickly drivers tire out allowing them to offer more rides, faster.

"The assister? Yeah, I use it," said one rider who said his name was Diallo.

When asked if he knew he was breaking the law, Diallo said he didn't.

Another man who explained why he uses the illegal devices stating, "It's easier," the man said his name was Andre and later told 7 On Your Side Investigates it was Alexander.

That driver also told 7 On Your Side Investigates he did not know the motors and pedal assist devices were against the law.

Those statements are surprising, considering the New York City Department of Consumer Affairs licensing checklist asks pedicab drivers to attest that their, "pedicabs are not electrically powered or use motor-operated mechanisms."

"I don't have anything to say," Andre said in response to further questioning. "I don't think the story will benefit us."

Passersby called 7 On Your Side Investigates' findings concerning and said they would reconsider taking a tour of the city by pedicab.

"We wouldn't after seeing this picture, no," said Ayad Zaria, who is visiting New York with his family from Saudi Arabia, after seeing a picture of a burned out rig from a motorized pedicab fire.

"I don't really want to be a fried patron," said Peyton Sims, in town from Portland, Oregon. "That would be detrimental."

"With all the pedestrians, yeah, that is concerning," said New York resident Zara Crowley.

Only the Parks Department could say exactly how many tickets it wrote specifically for use of the illegal motors.

A spokesperson indicated the department had issued, on average, about three citations a month this year.

The New York City Police Department, said it had issued 607 summons to pedicab drivers in 2017, a roughly 3 percent compared to last year. The Department could say how many of those summons, specifically, were for illegal motors.

The Department of Consumers Affairs said it handles enforcement during scheduled inspections.

A spokesperson indicated DCA had conducted 359 pedicab inspections and issue 99 violations as a result.

Operators playing by the rules, who spoke to 7 On Your Side Investigates said the city doesn't seem to care about the law and indicated the enforcement that does occur doesn't make a dent in the problem.

"The industry has to be cleaned up by DCA or police," said Dimitri, another rider not using a pedal assist.

Police say the law is difficult to enforce because the motors are often hidden and it's not readily apparent that the operator is breaking the law.